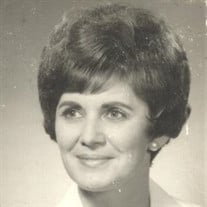 Mrs. Mary Louise Andrews Garten died at 8:07 a.m. Monday, December 23, 2019 at Four Seasons Retirement Center. Mrs. Garten was born May 6, 1928 to Madge Puckett Andrews and Finnis (Andy) Andrews in Lafayette, Indiana. She graduated from Shelbyville High School in May 1946. After graduation she worked at Indiana Bell Telephone Company. She was married to William (Bill) L. Garten on October 3, 1946 in the West Street Methodist Church in Shelbyville by the Rev. Albert J. Spaulding. A son, William Allen Garten, was born to this union. He and his wife, Jennifer (Meyer) Garten of Francesville, IN, survive as does a great-granddaughter, Jaina Jade Garten of Russiaville, IN. Mrs. Garten was employed by Irwin Union Bank and Trust Company upon moving to Columbus with her husband and son in 1952. In 1961, she became a legal secretary to Joseph S. Thompson, attorney-at-law, until 1970 when she began employment as a secretary for BSCS, retiring in 1987. While working at IUBT, Mrs. Garten attended classes at Indiana Business College. She was a member of Phi Beta Psi Social Society, American Business Women and the Elk’s Club of Columbus, a volunteer Book Buddy at Richards School, and a former Columbus Regional Hospital volunteer. In April 2013, Mary moved to Four Seasons Retirement Home in Columbus. While living there she became involved in different activities. Included was secretary to the Resident Council; Hall Representative to the council; Chairperson of the Dining Committee; in January 2014, was coordinator for a program called “Story Time”; and also was a member of the Book Club at Four Seasons. She was preceded in death by her husband of 59 years, Bill Garten, on December 10, 2005; brothers, William and David Andrews, both of Shelbyville, and Rev. Robert E. Andrews of Bethesda, MD; sisters, Barbara Andrews Jackley of Omaha, Nebraska and Carolyn Andrews Cruz of Columbus; a granddaughter, Ashley Nicole Garten and a grandson, Jeffrey Andrew Garten. Surviving are sisters and brother-in-law, Linda (Ronald) Fourman of Columbus, Sarah Sue Andrews of Columbus; a sister-in-law, Mary Alice Cord Andrews of Shelbyville, IN; and many nieces and nephews and great nieces and nephews. Mrs. Garten traveled to Hawaii, Bahamas, Alaska and St. George Island, FL. She enjoyed playing Hand and Foot cards with friends, with whom she enjoyed many laughs and good times. Mrs. Garten was a member of the First Baptist Church of Columbus. A Celebration of Life service for Mrs. Garten will be at 10 a.m. Saturday, December 28, 2019 at Four Seasons Retirement Center Chapel, 1901 Taylor Road, Columbus, IN. with Rev. Jon Carlstrom conducting the service and music will be provided by David Brown. Calling will be from 4 p.m. – 7 p.m. Friday, December 27, 2019 at Jewell-Rittman Family Funeral Home. Private inurnment will be held at Garland Brook Cemetery Mausoleum at a later date. In lieu of flowers, Mrs. Garten requested memorial contributions go to Parkinson’s Disease Foundation, Diabetes Disease Foundation or American Cancer Society.

The family of Mary Louise Garten created this Life Tributes page to make it easy to share your memories.

Send flowers to the Garten family.