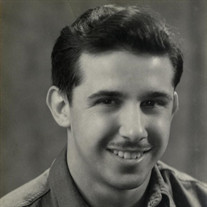 Marvin R. Sabatino, 97, passed away on March 7, 2022 at his residence in Columbus, Indiana following a long illness. He was born September 19, 1924 in Marshall County, Indiana, the son of Sam A. Sabatino and Orpha P. Sabatino. He was preceded in death by his parents and by a son, Matt (Susan) Sabatino, a brother, Marshall (Mary Janice) Sabatino, and a sister, Mary Ann (Martin) Miller. He is survived by his wife of 72 years, Jacqueline Sabatino, a son, Mark (Linda) Sabatino, and grandchildren Sarah Sabatino (Drew Worthen), Nicholas Sabatino, Michael (Rebekah) Sabatino, all of Greenwood, Indiana; and Anne (Jacob) Hardy of Lexington, Kentucky, as well as great-grandchildren, Matthew Sabatino and Rori Sabatino, both of Greenwood, Indiana. Mr. Sabatino was a 1943 graduate of CO-OP High School in Dayton Ohio. He worked as a Customer Service Manager for Master Electric Company in Dayton and its successor Reliance Electric Company for 41 years, relocating to Columbus, Indiana in 1961. He retired from Reliance in 1982. He was a long-time member of First Christian Church, after which he became a member of the local Reformed Presbyterian Church until his death. He enjoyed golfing, fishing, and, most of all, spending time with his family. He was a U. S. Army veteran of World War II, and took part in the Allied Expeditionary Force assault on “Bloody Omaha” Beach, Normandy, France during the D-Day Invasion. Armed only with his medical supplies and personal courage, he sailed through heavy seas and mine-strewn waters under intense enemy fire on June 6, 1944 to care for and evacuate soldiers wounded in combat during the battle. In 2019, he was awarded the Legion of Honor, France’s highest military decoration, by French President Emmanuel Macron for his valor and service in the struggle to liberate France and Europe from Nazi tyranny. He had made some 22 crossings of the North Atlantic Ocean in the midst of severe storms and attacks by enemy submarines. It was Mr. Sabatino’s request that he be interred as quickly as possible following his death with no ceremonies other than simple military honors. A graveside service will be held Monday, March 14, 2022 at 1:00 P.M. EDT at Miami Valley Memory Gardens, 1639 E. Lytle 5 Points Road, Centerville, OH. Arrangements are entrusted to the Jewell-Rittman Family Funeral Home of Columbus, Indiana. You are invited to send a message of condolence to the Sabatino family via the funeral home website: www.jewellrittman.com

Marvin R. Sabatino, 97, passed away on March 7, 2022 at his residence in Columbus, Indiana following a long illness. He was born September 19, 1924 in Marshall County, Indiana, the son of Sam A. Sabatino and Orpha P. Sabatino. He was preceded... View Obituary & Service Information

The family of Marvin R. Sabatino created this Life Tributes page to make it easy to share your memories.

Send flowers to the Sabatino family.