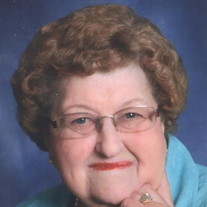 Martha Ann Smock, 86, of Columbus, passed away at 8:50 p.m. Saturday, December 28, 2019 at Miller’s Merry Manor in Hope. She was born in Bartholomew County on September 17, 1933 to Raymond Carter Smock and Lucille Adair Smock. Martha graduated from Columbus High School in 1952. While she was growing up she enjoyed working for her father for several years and then became owner and operator of Southern Machine Company for 50 plus years. Martha was a member of the First United Methodist Church in Columbus where she sang in the Children’s and Adult Chancel Choir for over 45 years. She played Bells in Chancel Bell Choir. Martha was a member of Alpha Nu Masters-Beta Sigma Phi Sorority, past member of Zonta Club International, Joseph Hart Chapter NSDAR, Bartholomew County Historical Society and Indiana United Methodist Childrens Home where she was a board member. She was a caregiver for her sister Norma for several years, enjoyed music, traveling, going out to eat with her friends and enjoyed playing piano for family during the holidays. Funeral services will be held 10:30 Monday, January 6, 2020 at Jewell-Rittman Family Funeral Home with Pastor Howard Boles officiating. Calling will be from 2 p.m. – 5 p.m. Sunday, January 5, 2020 at the funeral home and from 9 a.m. until service time on Monday. Burial will be held at Garland Brook Cemetery. Survivors include her; nieces and nephews, Dale (Beth) Smock of Florida; Suzanne Smock of Indianapolis; Judy (Terry) Braly of Tennessee; cousins, Stanley (Cheryl) Smock and Alan (Kay) Smock; great nieces and nephews, Brian (Christina) Smock and Amanda (Jean) Smock Milesi, Nathaniel Postlewaite and Drew Postlewaite and second cousins. She was preceded in death by her parents; sister, Norma Smock; brother, Warren Smock; sister-in-law, Margaret Smock; a cousin, Linda Smock and a infant nephew, David Smock. Memorial contributions may be made to the First United Methodist Church of Columbus or Just Friends.

The family of Martha Ann Smock created this Life Tributes page to make it easy to share your memories.

Send flowers to the Smock family.