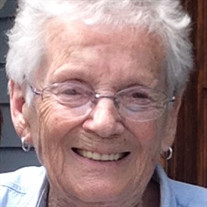 Marijean Mann, 89 of Columbus, passed away on August 6, 2021 at Columbus Regional Hospital. Mrs. Mann was born August 21, 1931 in Columbus, the daughter of Farrel Cavanaugh and Minta (Phipps) Cavanaugh. She graduated from Columbus High School in 1949 and soon after started business classes. She then took a job as a teller at the First National Bank of Columbus. She became interested in bookkeeping and began working in that department at the bank, which would prove to be useful for the rest of her life. It was on April 6, 1951 when Marijean would marry her lifelong love, Richard Mann, an ambitious electrician. The following year, in 1952, she and Dick purchased Thomas Electric Company and Marijean found herself as the “inside woman.” As business manager, her roles included retail sales of lighting fixtures, lamp shades, lamp parts and small appliance repair. Marijean was also responsible for billing and statements and taking calls for the construction portion of their business. She was a familiar face, taking care of everyone that walked through the doors or phoned. Most everyone she served, came away from the experience feeling as though they had just met a new best friend. While Marijean always made sure family came first, she had the ability to blend both her love for the family and her love for the business. Over the next 70 years, Thomas Electric would employ both her mother and father, a sister-in-law and brother-in-law, two sons and all four grandsons, as well as several long-time friends. It was truly a family business that was established and grew from Marijean’s basic principles, which included honesty, integrity and love. She dearly loved her family. She made sure everyone was picked up or dropped off at a moment’s notice. She participated in whatever the family did, including camping, fishing, picnics and even frying frog legs. She attended endless activities of her grandchildren and great grandchildren including tennis, baseball, basketball, dance recitals, show choir, soccer and ultimate frisbee. Marijean had a knack for thrift store shopping, which was her way of preparing for a lot of these family events. Her car had a bottomless trunk. If you were cold she had hats, mittens and sweatshirts in nearly every size. If it was hot, she had sunscreen and misting bottles. If it was raining, there were umbrellas and ponchos. If the mosquitoes were thick, a bottle of insect repellant was sure to be found. And of course, there was always a cooler for every outing, complete with drinks and snacks. Everyone had what they needed and that’s the way Marijean liked it. Marijean will always be remembered and loved by a grateful family, for her gentle ways, her humor and her devotion to family and her insistence on being good, kind and generous. And of course, her loving and calming smile will always be with us. Her family thanks her for being the best wife, mother, mother-in-law, aunt, grandma and GG anyone could ever want. We dearly love you. Surviving family include two sons: Richard A. (Deena) Mann and James S. (Debbie) Mann, both of Columbus; grandchildren, Richard A. Mann III, James B. Mann, Ryan Mann and Logan Mann; great-grandchildren, Jaxon Mann, Leo Mann, Loren Mann, Alicia Mann, Ella Mann, Laisha Mann, Nathan Mann, Kaleb Etter and Lyla Mann. She was preceded in death by her loving husband and two sisters, Betty Kinsel and Sue Dale Cavanaugh. Funeral arrangements for Marijean are being handled by Jewell-Rittman Family Funeral Home. Visitation will be 5 to 7 p.m. Friday, August 13, 2021 at the funeral home and one hour prior to the funeral on Saturday. The service is at 1 p.m. with the Rev. Steve Yeaton officiating. Entombment will follow at the Garland Brook Mausoleum. You are invited to view Marijean’s video tribute, light a virtual candle and send a message to the family via the funeral home website.

The family of Marijean Mann created this Life Tributes page to make it easy to share your memories.

Send flowers to the Mann family.