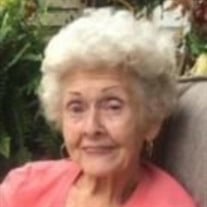 Margaret L. Rager, 92, of Columbus, passed away on Monday, January 17 at Silver Oaks Health Campus in Columbus. She was born in Columbus on January 27, 1929 to Ira Clyde and Nettie Verla (Rutan) Donica. She married Kenneth Lee Rager on December 26, 1948 and he preceded her in death on June 24, 2013. Margaret was a devout Christian who was baptized in January of 1949. She attended the East Columbus Christian Church, serving as a Bible School and Sunday School teacher and also volunteering at Hilltop Christian Camp. Besides being a mother and being involved in her church, Margaret was employed at several notable places where she met and made friends. She was employed at G.C. Murphy, Columbus Process, Anderson Dress Shop and was the cafeteria manager at Central Middle School and St. Bartholomew School for a number of years. In her spare time, she enjoyed working in her flower garden, playing with her grandchildren, cooking, baking and decorating. The couple had three children. Surviving are Kevin Lee (Brenda) Rager of Bargersville and Paula Sue (Bert) Kaufman of Columbus. She also has a brother Robert Donica of Columbus; seven grandchildren, Wendy (Jerry) Sue Watkins, Jason (Stephanie) Long, Christopher (Tara) Wren, Amy Michelle Wren, Ryan (Jodi) Wren, Sarah (Jason) Caudill and Laura (Darren) Otte. She also has eight great grandchildren; five great-great grandchildren and several nieces and nephews. She was preceded by her husband, her daughter Debra K. LaFont and a sister, Kathryn Oyer. Funeral services will be 1:00 PM, Friday, January 21 at the Jewell-Rittman Family Funeral Home with Mike Gillespie officiating. Visitation will be two hours prior to the service, beginning at 11:00 AM. Following the service, she will be laid to rest beside her husband in Garland Brook Cemetery. The family request memorials be made to the Hilltop Christian Camp in memory of Margaret. You are invited to view Margaret’s video tribute, light a virtual candle and send a message to the Rager family via the funeral home website: www.jewellrittman.com.

Margaret L. Rager, 92, of Columbus, passed away on Monday, January 17 at Silver Oaks Health Campus in Columbus. She was born in Columbus on January 27, 1929 to Ira Clyde and Nettie Verla (Rutan) Donica. She married Kenneth Lee Rager on December... View Obituary & Service Information

The family of Margaret L. Rager created this Life Tributes page to make it easy to share your memories.

Margaret L. Rager, 92, of Columbus, passed away on Monday, January...

Send flowers to the Rager family.