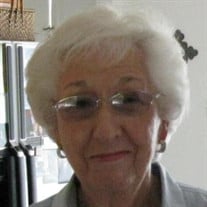 Margaret E. Thomas Eddelman Nelson, 88, of Columbus, died at 3:47 a.m. September 10, 2020, at Columbus Regional Hospital. Margaret was born February 5, 1932, in Miami, Florida, the daughter of Hobert and Nellie M. Sullivan Thomas. She was married to her first husband, Dale Eddelman, for 32 years before his passing May 9, 1986. She then married Robert C. Nelson October 17, 1992; he preceded her in death November 19, 2018. She attended Franklin College and worked in the President’s office at the college. Margaret was also employed as a secretary for Dr. C. O. Weddle and First Baptist Church. Margaret was a long-time member of First Baptist Church where she was involved in the Prayer Shawl Ministry, Bible study classes, and volunteered in several positions. She enjoyed sewing, traveling, and gardening. “I love you all and pray God’s love and blessings will lead and guide you throughout your life and beyond.”, Margaret. A private graveside service will be held September 18 at Garland Brook Cemetery with a memorial service for family and friends to be held at a later date. Memorials may be made to the First Baptist Church Foundation or the donor's choice of charity in memory of Margaret. Survivors include her sons, Eric (Susan) Eddelman of Brown County and Alan (Judie) Eddelman of Columbus, and stepsons, David (Lisa) Nelson of Hastings Nebraska and Richard Nelson of Avon Indiana; sister, Joyce Verhagen of North Judson, Indiana; grandchildren, Patrick (Alexandria) Eddelman, Erica (Anthony Ryan) Eddelman, Daniel (Rachel) Eddelman, Kaitlyn (Jake) Champlin, Brenna Eddelman, and Lauren (Jacob) Hamblin; and great-grandchildren, William and Eleanor Eddelman. She was preceded in death by her parents; husbands, Dale and Robert; and three brothers and one sister. Arrangements provided by the Jewell-Rittman Family Funeral Home. You are invited to light a virtual candle and send a message to the family via the funeral home website, www.jewellrittman.com.

The family of Margaret E. Thomas Eddelman Nelson created this Life Tributes page to make it easy to share your memories.