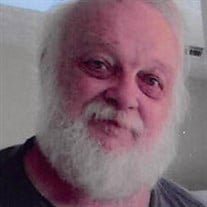 Lyle D. Hundley, 69, of Columbus, died at 1:00 p.m. March 3, 2020, at Silver Oaks Health Campus. Lyle was born December 5, 1950 in Sedgwick County, Kansas, the son of Lyle Dwyer Hundley and Christina Wanita Hanson Hundley. Lyle enjoyed the trucking industry and retired from Encon after driving for various companies for over 15 years. He proudly served his country in the Army National Guard. Lyle’s life was not complete without his fury family members, Hillbilly, his blue tick coon hound and Amira, his pitbull. Lyle was a loving father and brother and will greatly missed by all that knew him. Visitation will be from 12 p.m. (Noon) until 2 p.m. Sunday, March 8, 2020 at Jewell-Rittman Family Funeral Home. Military honors will be presented by the Bartholomew County Veterans Honor Guard at 2 p.m. Sunday at the funeral home. Burial will be at Tannehill Cemetery Arkansas City, Cowley County, Kansas at a later date. Survivors include son, Lyle Dwyer Hundley of Bloomington; daughters, Christina Oren and Heather Rose of Columbus, and Sherry Walters of Indianapolis; sister, Carolyn (Fred) Johnson of Columbus; grandchildren, Jessie, Michael, Paige, Brody, Josh, Ashley, and Katie. He was preceded in death by his brothers, Harry Hundley and Mike Hundley. You are invited to light a virtual candle and send a message to the family via the funeral home website. www.jewellrittman.com

The family of Lyle D. Hundley created this Life Tributes page to make it easy to share your memories.

Send flowers to the Hundley family.