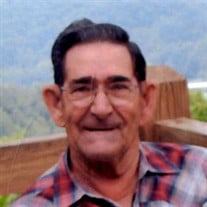 Lloyd Daniel Gibson Sr, 86, of Columbus, In, died at 6:20 p.m., December 25, 2019 at Our Hospice of South Central Indiana Inpatient Facility. Lloyd was born November 23, 1933 in Letcher County, Kentucky. He was the son of Henry Gibson and Hattie Collier Mead. He married Maleda Jean Miller on August 23,1953 in Whitesburg, KY and she proceeded him in death in 2001 and he later married Pauline Elliott on February 14, 2002 in Columbus and she proceeded him in death in 2014. Lloyd worked at Golden Foundry, and in 1975 moved to Mississippi and worked as a first class painter at Ingalls Shipyard for 13 years. He was a member/deacon at Mt. Olive General Baptist Church and a long standing member of Lighthouse Full Gospel Tabernacle in Columbus, IN. The funeral will be at 11:00 a.m. on Wednesday, January 8, 2020 at Jewell-Rittman Family Funeral Home with Rev. Pete Sexton officiating. Viewing will be from 4:00 to 8:00 p.m. on Tuesday, January 7, 2020 and one hour prior to service time on Wednesday. Burial will be at Garland Brook Cemetery. Memorials can be made to Our Hospice of South Central Indiana. Survivors include son's, Lloyd Daniel Jr.(Orpha) Gibson of London, KY. Ernie Lee (Sharon) Gibson of Gulf Breeze, FL. and Jackie Dean Gibson (Patricia Mason) of Columbus, IN; Bill (Connie) Miller and Jim (Robeana) Miller of Columbus,IN; a daughter, Sharon (Elmer) Meredith of Columbus, IN; brothers, Ireland Sexton and Carl Meade; Sister, Gladys Sexton; 7 grandchildren and 14 great grandchildren and several nieces and nephews. He was proceeded in death by both his wives, a daughter Joyce Jean Gibson, 2 stepsons, 2 stepdaughters, a grandson, and great grandson. Brothers George Dewey Estep Sr, Carlis "Curly" Sexton, Babe Sexton and Hubert Leon Mead sisters: Ethyl Estep Neely, Irene Meade, Christine Hurbert and Ilene Meade. He loved gardening, canning, fishing and his roses. He will be greatly missed by family, friends and all that knew him. He loved his family and friends and talking about the Lord.

Lloyd Daniel Gibson Sr, 86, of Columbus, In, died at 6:20 p.m., December 25, 2019 at Our Hospice of South Central Indiana Inpatient Facility. Lloyd was born November 23, 1933 in Letcher County, Kentucky. He was the son of Henry Gibson and Hattie... View Obituary & Service Information

The family of Lloyd Daniel Gibson created this Life Tributes page to make it easy to share your memories.

Send flowers to the Gibson family.