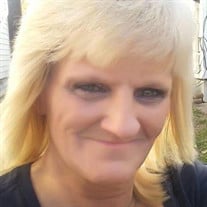 Linnita Lee “Linni” Burton, 54 of Columbus, IN, passed away 10:55 a.m. Sunday, March 28, 2021 at IU Health University Hospital. She was born on October 31, 1966 in Flat Rock, IN to Wayne D. Endicott and Betty Lou (Parrish) Endicott. Linnie enjoyed being a mother, cooking, writing and poetry. She had several of her poems published. When it was your birthday you got a special personalized birthday card with your own special poem in it from her. Linni also loved spending time with her friends and family. She was the absolute best “Mammy” to her three favorite girls, Jalynn, Leah and Sophee, who will always and forever be Mammy’s Girls. Linni will be sadly missed and forever hold a special place in our hearts. A memorial service will be held at 3 p.m. Saturday, April 10, 2021 at Jewell-Rittman Family Funeral Home. Calling will be from 1 p.m. until service time Saturday at the funeral home. Linni is survived by her fiancé and companion, Darrin Herr of Columbus, IN. Estranged husband and father of her children, David Burton of Edinburgh, IN; a daughter, Jami Lou (Tony Perry) of Columbus, IN; a son, Joseph W. Burton of Columbus, IN and three grand-daughters, Jalynn, Leah and Sophee Perry all of Columbus, IN; brothers, Troy Endicott of Columbus, IN, Drew Endicott of Franklin, IN and Cort Endicott of Anderson, IN; sisters, Janni Endicott of Columbus, IN, Lorri (Mike Taylor) Endicott of Franklin, IN, Terri (Joe Turner) Endicott Turner of Columbus, IN. Linni was preceded in death by her parents; a brother, Todd Endicott

The family of Linnita Lee "Linni" Burton created this Life Tributes page to make it easy to share your memories.

Send flowers to the Burton family.