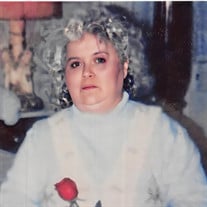 Linda Sue Duncan, 70, of 1805 South Mohave Avenue in Parker, Arizona passed away on Tuesday afternoon, April 5th, 2022 at her home. Mrs. Duncan was born January 29th, 1952 in Columbus, Indiana. She was the daughter of Ralph and Marie Skinner. She married Thomas Calvin Duncan Sr. on January 13th 1973. They renewed their wedding vows on January 13th 1997 for their 25th wedding anniversary. Mrs. Duncan was a former employee of McDonalds in Columbus, Indiana. Mrs. Duncan started McDonalds in 1982 and worked there until 2009. She moved to Arizona in 2009. Mrs. Duncan went by the name of Sue. Her Heart was so big in love, she opened it to everyone she met in life. She was a loving wife, friend, and mother to her kids. She would open her door to anyone in need. She enjoyed going for drives in the hot Arizona heat. She would say “I can drive the same road and see something beautiful and different every time.” She enjoyed yard sales and going to flea markets with family and friends. She was just a very loving soul. The Funeral will be on Thursday, May 12th 2022 at 12:00 p.m. at Jewell-Rittman Family Funeral Home on 25th Street in Columbus. Pastor Robert Stillinger of Manasseh Ministries and Pastor Edward Cottrell of Hope U.M.C will be officiating. Calling will be from 10 a.m. until service time at noon. Burial will be at Indiana Veterans Memorial Cemetery in Madison, where she will be laid to rest with her late husband. Survivors include her son Michael Scott Duncan of Columbus, Indiana; daughter Michelle Lynn Pennington of Indiana; Sister Karen Skinner and brother Larry Skinner both of Columbus; Granddaughters Alexis Sidwell and Ashley Duncan both of Columbus, and Brittney Flitter of Florida; Grandsons Trevor Moon and Laron Manhart both of Columbus; great granddaughter Audrey Sidwell of Columbus; and boyfriend Armando (Mando) Baeza of Parker, Arizona; and countless extended family and friends between Columbus and Arizona. She was preceded in death by her parents; Her Husband Thomas C. Duncan Sr. (pops); Son Thomas C. Duncan Jr. (pops Jr.); Her Sister Rhonda Elam and Brother Kenneth (Kenny) Skinner. In lieu of flowers, memorial contributions may be made to Jewell-Rittman Family Funeral Home to help with expenses.

Linda Sue Duncan, 70, of 1805 South Mohave Avenue in Parker, Arizona passed away on Tuesday afternoon, April 5th, 2022 at her home. Mrs. Duncan was born January 29th, 1952 in Columbus, Indiana. She was the daughter of Ralph and Marie Skinner.... View Obituary & Service Information

The family of Linda Sue Duncan created this Life Tributes page to make it easy to share your memories.

Send flowers to the Duncan family.