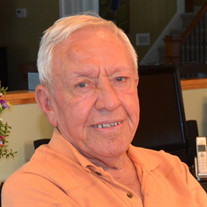 Leland “Lee” Robertson, 89, of Columbus, died at 2:55 a.m. Sunday at Our Hospice of South Central Indiana Inpatient Facility. He was born March 23, 1931 in Columbus to the late John and Esta Cooper Robertson. Lee was the embodiment of the self made man. He graduated from Clifford High School with the class of 1949 and married Shirley McKinney in 1951. With limited education, he started as a bank teller and eventually opened a small used car lot on 8th Street in Columbus. Starting a new business was difficult but with perseverance and the support of his wife, he eventually became a Chevrolet-Pontiac dealer. Lee had a lively personality, generous with others and was devoted to his family. These qualities earned him many friends, loyal employees, customers and the love of his family. Lee was a man of many passions. He had a short career as a race car driver in the 1950’s and went on to sponsor a race car built by his father-in-law. He built several custom homes in the Columbus area, even while running his business and later formed Robertson Construction with his wife. He enjoyed gardening, grilling (his steaks were legendary), carpentry, basketball and tennis. It seemed like there was very little he couldn’t do except sing. He and Shirley attended the First Christian Church and later joined the First Baptist Church in Columbus. During the last years of his life, he reunited with his grade school sweetheart, Ethel Baute and they were married in 2018. Lee and Shirley’s only child, Rick, was born in 1952. Rick left the car business while in his 30’s and with the love and support of his parents became a board-certified physician. Lee is also survived by Rick’s wife, Michelle; grandchildren, Sylvia and Carl (who called him Grampy), of Plainfield; sisters, Eva Bennett of Columbus and Jane Paetzel of Hope; brother, Steve (Vicki) Robertson of Hope and many extended family members. Father, brother, friend and “Grampy”, rejoice in heaven with the Father in the room he has prepared for you. A private memorial service will be held on Saturday May 9, 2020 at Jewell-Rittman Family Funeral Home with the Rev. Dan Cash officiating. Following the service, Lee will be laid to rest with Shirley in Garland Brook Mausoleum. Memorial gifts may be made to the IU Simon Cancer Center for Miles for Myeloma. Please make checks payable to: IU Foundation/Miles for Myeloma Fund and mail to IUF P. O. Box 70742 Indianapolis, Indiana 46207-7072 or online at: https://www.cancer.iu.edu/m4m. Indicate “In memory of Leland Robertson” on the memo line.

Leland &#8220;Lee&#8221; Robertson, 89, of Columbus, died at 2:55 a.m. Sunday at Our Hospice of South Central Indiana Inpatient Facility. He was born March 23, 1931 in Columbus to the late John and Esta Cooper Robertson. Lee was the embodiment... View Obituary & Service Information

The family of Leland Robertson created this Life Tributes page to make it easy to share your memories.

Send flowers to the Robertson family.