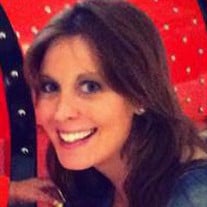 Lauren Marie Floyd, 34, of Columbus, Indiana, passed from this life and entered her eternal resting place in Heaven with her Savior, grandmothers and grandfather, at IU Methodist Hospital Lauren was born November 19, 1985, in Columbus, Indiana, the daughter of Dean Floyd and Angela Floyd. Lauren graduated in 2004 from Columbus East High School in Columbus, Indiana and graduated from Indiana University in 2008 with a BS in Tourism Management and a minor from the Kelly School of Business. Lauren currently was working for Columbus Regional Hospital as a Patient Financial Counselor. She participated in the Farmers Market and was known as the Tie-Dye Lady. Her depth of color theory was what made her such a great artist. Lauren was smart, funny, and quick witted. Her son Jackson, age 7, was the love of her life. In his words, “she has taken care of me every second of my life.” Her job as a mother was what she cherished the most. Lauren’s love for friends and family were evident with her beautiful smile as she talked with you. Survivors include her parents, Dean (Leesa Koopman) Floyd and Angela (Greg Brown) Floyd, both of Columbus; a son, Jackson Dean Floyd; sister, Rachel Dean Floyd of Columbus; grandparents, Larry and Dorothy Buchta of Columbus; uncle, John Buchta of Columbus; aunts, Kay (David) Mobley of Omaha, Nebraska; Anna (Doug) Pitkin of Huntington, West Virginia, and aunt Cindy of Columubs, IN.;cousins, Christopher Mobley of Omaha, Nebraska, Jarod Buchta of Columbus, Tanner (Tyler) Bowman of Lesage, West Virginia, Taylor Pitkin of Knoxville, Tennessee, Emily (Jon) Sulak of Lewisville, Texas, William Pitkin of Huntington, West Virginia, and Wyatt and Marie Bowman of Lesage, West Virginia. She was preceded in death by her grandparents, Alfred and Jean Floyd and grandmother, Flora “Beth Buchta” Willis. The funeral will be conducted at 1:00 p.m. Saturday, December 28, 2019, at Jewell- Rittman Family Funeral Home. Calling hours start at 10:00 a.m. day of funeral. Interment will be at Garland Brook Cemetery following service. Memorial donations may be made to Jackson Floyd Memorial Fund, with checks to be made out to the Jewell-Rittman Family Funeral Home. We know Lauren would be thankful for all the prayers received while she was in the hospital and grateful to the doctors, nurses and staff at CRH and IU Methodist. It is our hope that the autopsy will give answers that may help someone in the future.

Lauren Marie Floyd, 34, of Columbus, Indiana, passed from this life and entered her eternal resting place in Heaven with her Savior, grandmothers and grandfather, at IU Methodist Hospital Lauren was born November 19, 1985, in Columbus, Indiana,... View Obituary & Service Information

The family of Lauren Marie Floyd created this Life Tributes page to make it easy to share your memories.

Lauren Marie Floyd, 34, of Columbus, Indiana, passed from this...

Send flowers to the Floyd family.