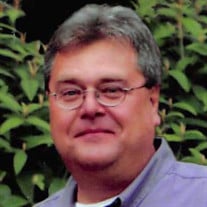 Larry Wayne Turner, 58, of West Lowell Road, died at 10:52 a.m. November 12, 2019, at I.U. Methodist Hospital. Larry was born November 17, 1960, in Columbus, the son of Roger L. and Lorene Brown Turner. He married Rebecca J. Clark June 22, 1996. He was a 1979 graduate of Columbus East and attended Bible Church of Columbus. In his early teens, Larry played hockey and continued to play in the adult program. Larry was a ham radio operator and an avid drag racer. The funeral will be conducted at 1 p.m. Saturday, November 16, 2019, at Jewell-Rittman Family Funeral Home with the Rev. Dave Marvin officiating. Calling will be 10 a.m. until service time Saturday. Interment will follow at Flat Rock Baptist Cemetery. Memorials may be made to Racers for Christ or Drag Racing Association of Women in honor of Larry. Survivors include his mother, Lorene Turner of Columbus; wife, Rebecca; sister, Sondra “Susi” Robbins of Columbus; brothers-in-law, Larry (Pam) Clark of South Boston, Virginia, and Steve (Barb) Clark and Jerry Clark, both of Columbus; and nephews, Richard Clark of St. Augustine, Florida, and Craig Clark of Maryland, and a niece, Kristen R. Robbins Dunn of Columbus. He was preceded in death by his father. The family would like to give a very special thank you to Dr. House and his R.N., Ruth, for the heart warming care given to Larry and his family.

The family of Larry Wayne Turner created this Life Tributes page to make it easy to share your memories.

Send flowers to the Turner family.