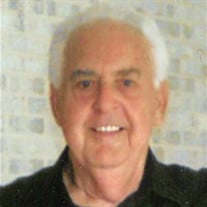 Larry Delmar Sowders, 77, of Knollwood Drive, died at 1:55 a.m. July 22, 2019, at Our Hospice of South Central Indiana Inpatient Facility. Larry was born October 7, 1941, in Henryville, the son of Delmar L. and Kathleen Stephenson Sowders. He married Shirley M. Parish November 14, 1959. He felt very blessed to be a school bus driver, getting to know the local children on his route, as he saved money to open his own business. Larry became a successful Columbus businessman and entrepreneur; owning and operating several Waffle House Restaurants in southern Indiana. He was a life-time member of the Moose Lodge and long-time member of the American Legion. He enjoyed singing and playing cards, and was a big sports fan and long-time softball player. Larry was a devoted husband, father and grandfather. He spent many hours watching his grandchildren participate in sporting events and school programs, and enjoyed their company anytime he was with them. The funeral will be conducted at 1 p.m. Friday, July 26, 2019, at Jewell-Rittman Family Funeral Home, Columbus, Indiana, with the Reverend Jay Vanderbur officiating. Calling will be 4 to 8 p.m. Thursday and one hour prior to the service. Burial will be at Garland Brook Cemetery following the service. Memorials may be made to the American Cancer Society. Survivors include his wife, Shirley; son, Randy D. (Robin) Sowders of Greensburg and daughters, Kathy L. Mann and Sandy R. (Dan) Asher, both of Columbus; brothers, Brad Sowders of Bedford and Scott Sowders of Bloomington; grandchildren, Justin Mann, Boone Asher, Delmar Andrew Sowders, Clay Asher, Jenna Malinsky, Trevor Sowders and Samuel Asher; and ten great-grandchildren. He was preceded in death by his parents; and a brother, Steve Sowders and sisters, Rheadawn Inman, Norma Bridwell and Patricia Hamilton.

The family of Larry Delmar Sowders created this Life Tributes page to make it easy to share your memories.

Send flowers to the Sowders family.