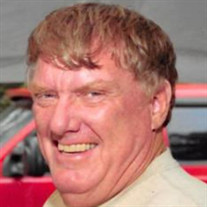 Larry Dale Boles, 73, of Columbus, died at 3:11p.m. March 11, 2020, at Columbus Regional Hospital. Larry was born July 30, 1946, in Jamestown, Tennessee, the son of Daley Robert and Loma Louise Beatty Boles. He married Jeannie Crider June 9, 1967, spending 52 years of marriage together. Larry served his country in the U. S. Navy during the Vietnam War. In 2008, he retired from Cummins working as a mechanical engineer. Larry had also worked part-time at Columbus Regional Hospital and Harden Trucking. The funeral will be conducted at 1 p.m.Monday, March 16, 2020, at Jewell-Rittman Family Funeral Home with the Rev. Doran Chambers officiating. Calling will be 2 to 6 p.m. Sunday and one hour prior to the service Monday. Burial will be at Bethel Baptist Cemetery with military honors presented by the Bartholomew County Veterans Honor Guard. Memorials may be made to the Bartholomew County Humane Society in memory of Larry. Survivors include his wife, Jeannie; daughters, Abby Avenatti of Ogilville and Amy Nickerson of Columbus; brother, Terry (Barb) Boles of Cleveland, Ohio, and a sister, Mary Ann (Bobby) Jones of Columbus; and grandchildren, Garrett Acton, Ethan Kopf, Darrien Nickerson, Keagan Nickerson, Kendall Nickerson and Cavan Nickerson. He was preceded in death by his parents. You are invited to view his video tribute, light a virtual candle and send a message to the family via the funeral home website www.jewellrittman.com

The family of Larry Dale Boles created this Life Tributes page to make it easy to share your memories.

Send flowers to the Boles family.