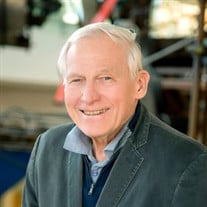 Kenneth Wm. Vieth Jr., 82, of Columbus, passed away on January 10 at his home after a brief illness. He was born in Fort Dodge, Iowa, on January 27, 1938, son of the late Kenneth and Florence (Clausen)Vieth Sr. On October 24, 1959 he married Ruth Ann Seel, who preceded him in death. He is survived by his two children, Ken (Cheryl) Vieth III and Cassandra Pheral along with his grandchildren: Jonathan McMillian, Ellen Pheral, and Lydia and Carter Vieth. He is also survived by his partner Leanne Loutner, and his siblings Gary (Marie) Vieth, Julie (Bill) Harris, and Sandy Davis. After serving in the Army, to include a tour of duty in Korea, Ken graduated from Southern Illinois University in 1964, receiving an MBA from Indiana University in 1966. Ken brought his young family to Columbus that year to begin a 21-year career at Cummins. During those years, he represented Cummins in Central and South America, the Middle East, and Japan. Taking early retirement from Cummins, he founded ACT Research Co. in 1986 where he was active until his death. At ACT he created a firm that specialized in data analysis and forecasting to help companies who desire to understand deeply cyclical commercial vehicle markets. Today, the company that he founded is widely regarded as the preeminent analytics shop in the space. Ken was devoted to his family and worked long hours (often more than his family wanted), to insure their needs were met. Ken’s family was not restricted to just his wife, children, and relatives. Once he realized there was a life beyond work, his family circle widened with his ease and joy in making many new friends and in meeting his partner, Leanne, and her family. He was a true gentleman who will be greatly missed by all those fortunate to have known him.. Visitation will run from 1:30 to 3:30 at Jewell Rittman Family Funeral Home in Columbus, Friday, January 15th. A private memorial service will follow at 3:30PM with a live feed of the event available on the homepage at www.jewellrittman.com to those not in attendance. In lieu of flowers, donations can be made in memory of Kenneth W. Vieth, Jr. to Love Chapel (311 Center St., Columbus, IN 47201), the Columbus Area Arts Council (www.artsincolumbus.org or mail to 431 Sixth St., Columbus,IN 47201), or to the Columbus Regional Hospital Foundation (www.crh.org mail to 2400 E. 17th St., Columbus, IN 47201). Due to the new mandate limiting gatherings to 50 people, visitors are required to wear face masks and maintain social distancing. We encourage you to share your support with the family, being cognizant that others wish to do the same. You may be asked to wait outside the building as we comply with this mandate.

Kenneth Wm. Vieth Jr., 82, of Columbus, passed away on January 10 at his home after a brief illness. He was born in Fort Dodge, Iowa, on January 27, 1938, son of the late Kenneth and Florence (Clausen)Vieth Sr. On October 24, 1959 he married... View Obituary & Service Information

The family of Kenneth Wm. Vieth Jr. created this Life Tributes page to make it easy to share your memories.

Send flowers to the Vieth family.