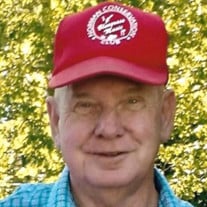 Kenneth Robert Lee Columbus, Indiana Kenneth Robert Lee, age 78, of Columbus, Indiana went to be with the Lord at 5:20pm, Sunday, December 27th. He was residing at Columbus Transitional Care. Mr. Lee was employed with Golden Casting Corporation for 42 years before retiring in 2003. Mr. Lee attended Jewell Village Separate Baptist Church. He enjoyed reading the Bible, listening to Bluegrass music, making people smile, and being with family and friends. In younger days, he loved hunting, fishing, gardening and working in his yard. A private family funeral service will be at 1:00 p.m. Saturday January 2, 2020 with Brother John Perkins officiating. You are invited to view the funeral service via the Internet (www.jewellrittman.com). Burial is at Hill Crest Cemetery located in North Vernon, Indiana. Memorial contributions may be made to The Greater Indiana Chapter of the Alzheimer’s Association. Mr. Lee was born October 30th, 1942 in Bartholomew County, Indiana to Kinley and Laura Mae Bryant-Lee. Mrs. Lee died upon giving birth to Kenneth, and he was then raised by his Uncle George and Aunt Eva Mae Bryant as their own son. He spent some time living in Adair County, Kentucky before returning to live permanently in Indiana. He married Evangeline Homner-Gates on September 19th, 1975 and she survives. He is also survived by a son, Robert E. (Mary Rose) Lee of Columbus; daughters, Terry Sue (Robert) White of Petersville, Tamara J. (Charles) Parker of Hope, Tracy E. (Dennis) Mccollum of North Vernon, and Cheryl D. (James) Spurgeon of Columbus; a step-son, John D. (Jonie) Gates of Martinsville, and a step-daughter, Dorene M. (Charles) Bowman of Taylorsville; and ten grandchildren, three step-grandchildren, and many great and great-great-grandchildren. He didn’t like the term “step-children”, as he raised and loved Dorene and John as his own. He was preceded in death by his sister, Darline Wheeler and by his Uncle and Aunt, who he knew as Mom & Dad.

The family of Kenneth R. Lee created this Life Tributes page to make it easy to share your memories.