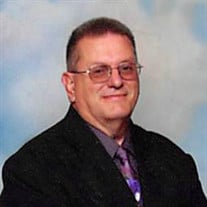 The Rev. Kenneth R. Lee, 60, of Columbus, passed away at 9:11 p.m., August 16, 2019, at Our Hospice of South Central Indiana Inpatient Care Facility. Kenny was born December 22, 1958, in Columbus, the son of Roger F. Sr. and Louise Burton Lee. He married Judy G. Akin on January 21, 1977. Kenny retired from Cummins Engine Company, Fuel Systems Plant. He loved to hunt and fish, and was President of Beulahland Baptist Camp in Green County, Kentucky. In 1988, Kenny was called to preach. In 2004, he followed in his father’s footsteps and became pastor of 6th Street General Baptist Church. The funeral will be at 10:00 a.m. Wednesday, August 21, 2019, at the Jewell – Rittman Family Funeral Home with the Rev. Don Hacker officiating. Visitation will be 4-8 Tuesday, and one hour prior to the service Wednesday. Burial will be at Bethel Baptist Cemetery. Memorials may be made to 6th Street General Baptist Church or for family funeral expenses. Kenny is survived by his wife, Judy G. Lee; his father, Roger F. Lee Sr. of Columbus; brothers, Roger “Butch” (Mary) Lee Jr. and Jerry L. (Diana) Lee, both of Columbus; a sister, Patricia L. (Gary) Fields of Columbus; several nieces, nephews, great-nieces and nephew, as well as great-great-nieces and nephews. Kenny is also survived by his beloved dog Mojie. He was preceded in death by his mother, Louise Burton Lee.

The family of Rev. Kenneth R. Lee created this Life Tributes page to make it easy to share your memories.