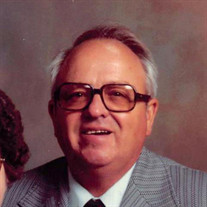 Kenneth Landreth, 91, of Columbus, passed away at 1:13 a.m. Sunday, October 17, 2021 at Our Hospice Inpatient Facility. Kenneth was born in Indianapolis on October 14, 1930 to Noble Landreth and Lorraine Doty Landreth. He married Barbara Catt on March 12, 1949. Kenneth was of Baptist faith and retired from the United States Air Force in 1971. After his retirement from the Air Force, he had a second career with the Bartholomew County School Corporation, he retired in 1980. Kenneth was a member of the Hartsville Masonic Lodge #547 and the Ancient Accepted Scottish Rite Valley of Indianapolis. In his spare time, he enjoyed writing, he was the author of over 20 published books. Funeral services will be at 1 p.m. Thursday, October 21, 2021 at Jewell-Rittman Family Funeral Home with Rev. Arthur Schwenk officiating. Calling will be from 11 a.m. until service time Thursday. Inurnment will be held at Flat Rock Baptist Cemetery at a later date. Memorial contributions may be made to Our Hospice of South-Central Indiana. Survivors include his son, Kenneth Landreth of Ocala, FL; daughters, Teresa Ann Greathouse of Hope, IN and April L. Burnett of Columbus, IN; grandchildren, Jennifer Hull, Stephanie Blake, Dana Jones, Samantha Burnett, Danielle Reichard, Jacqueline Landreth, Sarah Landreth and Gabrielle Landreth; 3 great grandchildren and 1 great great grandchild. Kenneth was preceded in death by his parents, his wife, Barbara Landreth on April 3, 2013.

The family of Kenneth Landreth created this Life Tributes page to make it easy to share your memories.

Send flowers to the Landreth family.