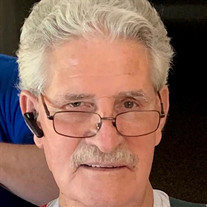 Kenneth M. Douglas (“Kenny”) of Elizabethtown passed into the arms of his Lord and Savior on Friday, February 4, 2022 at Columbus Regional Hospital, surrounded by family. Kenny was a member of the Brown’s Corner Chapel in Scipio and the Elizabethtown Volunteer Fire Department. He was a Registered Watchmaker and jeweler for many years as a small business owner of Douglas Jewelry in Hope and a manager of the jewelry department of JC Penney in Columbus. In later years he enjoyed a small farming operation, and his 1975 International Harvester 1568 Farmall twin-turbo show tractor, affectionately nicknamed “Leroy”. He is survived by his sons, Paul Bunting and Brad (Jane) Douglas of Greensburg, stepdaughters, Angie (Terry) Pritts and Lisa Orlich of Columbus, grandchildren, Luke Bunting of Washington, D.C., Zechariah Douglas of Greensburg, Michaela Bunting of Honolulu, HI, Andrew (Allie) Douglas of Greensburg, Christiana Bunting of Indianapolis, Noa Bunting of Tacoma, Washington, and Mandy Mitchell of Crothersville, great-grandsons, Jonah Douglas of Greensburg and Sully Mitchell of Crothersville, siblings, Cyrena (Randal) Puckett of Louisville, KY, Maureen (Norman) Nolley of Shelbyville, Darryl Douglas of North Vernon, Brenda Harden of Columbus, Steve Douglas of Elizabethtown, Mark (Tina) Douglas of Columbus, Tim (Angie) Douglas of Whiteland, Marcelene Huesman of Columbus, and numerous nieces and nephews. Kenny will also be missed by his faithful canine companion, Darcy. Kenny was preceded in death by his wife Judy Orlich, parents, Floyd and Lydia (Stroup) Douglas, brother, Ronnie Douglas, and stepson Mark Orlich. A viewing is scheduled for Tuesday, February 8, 2022 from 4:00 p.m. to 8:00 p.m. and one hour prior to service at the Jewell-Rittman Funeral Home in Columbus, with a 10:00 a.m. funeral on Wednesday, February 9, 2022 at the funeral home with Pastor Brad Douglas and Paul Bunting officiating. A brief burial service will be conducted graveside at the Haw Creek Cemetery in Hope. Friends wishing, may make memorials donations to the Elizabethtown Fire Department or the Brown’s Corner Chapel Church through the funeral home. Live streaming of the service will be available on the day of service at 10:00 a.m. by going to www.jewellrittman.com. You are invited to view his video tribute and light a virtual candle and send a message to the family via the funeral home website www.jewellrittman.com.

Kenneth M. Douglas (&#8220;Kenny&#8221;) of Elizabethtown passed into the arms of his Lord and Savior on Friday, February 4, 2022 at Columbus Regional Hospital, surrounded by family. Kenny was a member of the Brown&#8217;s Corner Chapel in... View Obituary & Service Information

The family of Kenneth M. Douglas created this Life Tributes page to make it easy to share your memories.

Kenneth M. Douglas (“Kenny”) of Elizabethtown passed into the...

Send flowers to the Douglas family.