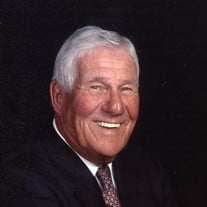 Karl E. Forster, 94, of Columbus, passed away August 21, 2021 at Our Hospice of South Central Indiana Inpatient Facility. Karl was born June 24, 1927 in Columbus, the son of Henry and Clara Kiel Forster. He married Eileen M. Nolting on November 26, 1950. Karl is survived by his children Mark Forster of Columbus, Kevin (Sophie) Forster of Franklin, Tennessee, Ann (Dale) Gamble of Columbus, Brian (Karen) Forster of Olathe, Kansas, and Beth Horn of Columbus; 12 grandchildren; and 7 great-grandchildren. He was preceded in death by his parents; his wife Eileen on June 24, 2012; as well as siblings George Forster, Frank Forster, Henrietta Myers, Dorothy Mae Behrman, Imogene Scheidt, Paul Forster, Ebert Forster, Earl Forster, and Lois Forster. Karl was a lifelong member of St. Paul’s Lutheran Church Clifty, and has spent his entire life farming. He also was a carpenter, having built his own home. Karl and his brothers developed Mineral Springs housing addition. He was active in the local Democrat Party, and previously served the community as an elected member of the Bartholomew County Council. Karl also has previously served as a Sandcreek Township Advisor, and previously served on the board for the Solid Waste Disposal Authority and Eastern Bartholomew Water Corp. The funeral will be at 12:00 p.m. Thursday August 26, 2021 at St. Paul Lutheran Church Clifty with Pastor Douglas Bauman officiating. Visitation will be from 5:00 until 7:00 p.m. Wednesday August 25, 2021 at the Jewell -Rittman Family Funeral Home and one hour prior to the service Thursday at the church. Burial will be at St. Paul Lutheran Cemetery. In lieu of flowers, memorials may be made to St. Paul Lutheran Church Clifty or Our Hospice of South Central Indiana.

The family of Karl E. Forster created this Life Tributes page to make it easy to share your memories.

Send flowers to the Forster family.