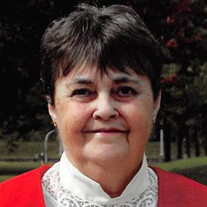 Judith Marlene “Judy” Beckett, 81, of Columbus, died at 1:15 p.m. February 3, 2020, at Willow Crossing Health and Rehabilitation. Judy was born September 30, 1938, in Columbus, the daughter of Lloyd L. and Thelma F. Harris Huffer. She was formerly married to Art Beckett. She had been employed with the Bartholomew County courts, working in Superior Court II, for several years, managed the Traffic Department, was a court reporter for 21 years, and was Deputy Matron for Sherriff Jim McKinney. Judy also had worked at David R. Webb Co., Dr. C. David Ryan’s office and five years as office manager at Columbus North High School for the Dean of Boys and Girls. Judy was a former member of Newbern Methodist Church, where she was married. She was a member of St. Columba Catholic Church, where she was a lector and commentator, lead the music, and sang in a small contemporary group. She went flying with many friends, took flying lessons, and got to fly in the Indiana State Police helicopter on many occasions. She also completed five sky diving jumps and went white water rafting in West Virginia. She was an avid reader and walker who loved flowers and life in general. Judy was a huge fan of Bobby Knight and the I.U. Hoosiers, along with the Indianapolis Colts. Judy loved her sons, Terry and Tony; brother, Gene; her nieces and nephews; all of the family; her dog, Peyton; and her many close friends. The funeral service will be conducted at 2 p.m. Saturday, February 8, 2020, at Jewell-Rittman Family Funeral Home with Father Chris Wadelton officiating. Visitation will be noon to the time of service. Cremation is planned and cremains will be scattered at a later date. Memorials may be made to the Alzheimer’s Association. She is survived by her sons, Terry C. Beckett of Columbus and Tony D. (Brenda) Beckett of Seymour; stepson, David McCammon of Seymour and stepdaughter, Nicki McCammon of Brownstown; brother, Eugene L. Huffer of Newbern and sisters, Carolyn K. Richards of Columbus and Joan Crouch of Lyman, South Carolina; and step-grandchildren, Anthony McCammon. Judy was preceded in death by her parents; a son, Thomas Joe Beckett; and a brother, Lloyd E. Huffer.

The family of Judy Marlene "Judy" Beckett created this Life Tributes page to make it easy to share your memories.

Send flowers to the Beckett family.