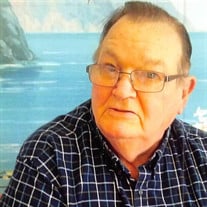 Joseph Edward Warner, 88, of Columbus, died at 2:25 p.m. Friday, September 17, 2021, at home. Joseph was born August 3, 1933 in Columbus, the son of Dale William and Verna Leora (Enoch) Warner. He married Betty Lou McWilliams on December 25, 1952. He later married Sandra Rehme-Warner on May 22, 1999. He was proud to have served his country in the United States Army as a Paratrooper. Joseph worked at Kroger Bakery in Indianapolis for over 20 years. Joseph enjoyed any kind of Cowboy Western Movie. Gunsmoke, John Wayne and Grit TV, where some of his favorites. Joseph was a great cook. His specialty was German Chocolate Cake from scratch. Even though he was talented in the kitchen, Joseph will be remembered for being a jokester and a man that never met a stranger. The funeral will be at 10:00 a.m. Friday, September 24, 2021 at Flintwood Wesleyan Church with Pastor Wes Jones officiating. Military Rites will be performed by the Bartholomew County Veterans Honor Guard at the church at 10:00 a.m. Calling will be from 9:00 until 10:00 a.m., Friday at the church. Burial will be at Washington Park East in Indianapolis at 3:00 p.m. Memorials may be made to Our Hospice of South Central Indiana or Flintwood Wesleyan Church through the funeral home. Survivors include children, Roger (Kathy) Warner, of Columbus, David (Diane) Warner, of Indianapolis, Penny (Lori Swim) Warner, of Fishers, Iva (Les) Stanley Fishers, Mike (Tammy) Rehme of Taylorsville, Debbie (Bryant) Margison, of Shirley, Indiana, Mary Jo (Steve) Lunsford of Mexico, Missouri; brothers, John D. Warner and Charles D. (Julie) Fox, both of Columbus; sisters, Patricia Sparks and Peggy Swafford, both of Columbus; grandchildren; great-grandchildren; and nieces and nephews. He was preceded in death by his parents, wife, Betty Lou, and wife, Sandra and brothers, Donald, Dale and James Warner and a sister, Candy Henney. Services were entrusted to the Jewell-Rittman Family Funeral Home. You are invited to view the video tribute, light a virtual candle and send a message to the family via this funeral home website. To view Live Streaming of Joseph Warner’s service, please go to The Flintwood Wesleyan Church YouTube channel at 10:00 a.m. Friday, September 24.

The family of Joseph Edward Warner created this Life Tributes page to make it easy to share your memories.

Send flowers to the Warner family.