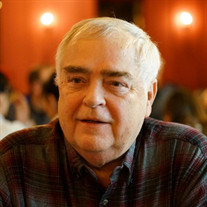 Joseph Rheid Hubbard, 73, of Columbus levelled up on August 8, 2021. He began his life at the Somerset hospital in Kentucky on January 4, 1948 the 4th of six children born to Martin and Clarine (Jasper) Hubbard. He was the favorite because he almost didn't make it. He started his education at Mt. Olive School and at the age of six was soon the top student in the third grade class. Shortly after that the family moved to Johnson County Indiana where his father operated Martin's Deep Rock Service Gas station in Franklin. He did well in high school and was a member of the Latin club. His college career at Franklin College was derailed by health problems which also kept him from being drafted. His working career started at Beveridge Paper Co. but after instigating a rent strike at his apartment complex he was soon moving north to Madison, WI. He was ever the idealist, a poet and dreamer and soon found himself joining the Socialist party and trying to organize a union at Ray-o-Vac. When that fell through, he left his family behind to pursue justice for the working class. He moved to New Jersey and started working for SEIU and was trained in union organizing techniques in San Francisco. Once trained he moved to Chicago where he worked with the AFL-CIO and later the Pharmacists Union. He was a member of the NAACP during this time. In the mid-1980s, he bought a Commodore 64 computer and taught himself to play music through computer programming and thus Free Spirit Software was born. Barney Bear was his greatest creation during this time although Music of the Masters was educational while enjoyable. He spent the next 15 years working in computer software sales making connections with people around the world. His final years were spent raising his son, Nicholas and researching the family history. He found many interesting connections and stories. During this time he became a Kentucky Colonel like his grandfather was before him. Rheid is survived by lifelong-friend and care-taker, Judy Kiesow. Children: Michael Toney, Christy (Mark Close) Hubbard, Terri Mohr and Nicholas (Hayley Ping) Hubbard. Siblings: Jim Hubbard, Dale (Barb) Hubbard and Carl (Lori) Hubbard. 7 grandchildren and numerous nieces and nephews. He was preceded in death by his sister Betty and brother Danny. Visitation will be on Thursday, August 12 from 11 a.m. to 1 p.m. followed by a short service at Jewell-Rittman Family Funeral Home with burial at Flat-Rock Baptist Cemetery to follow. You are invited to view his video tribute, light a virtual candle of remembrance and send a message of condolence to the Hubbard family via the funeral home website: www.jewellrittman.com

Joseph Rheid Hubbard, 73, of Columbus levelled up on August 8, 2021. He began his life at the Somerset hospital in Kentucky on January 4, 1948 the 4th of six children born to Martin and Clarine (Jasper) Hubbard. He was the favorite because he... View Obituary & Service Information

The family of Joseph Rheid Hubbard created this Life Tributes page to make it easy to share your memories.

Joseph Rheid Hubbard, 73, of Columbus levelled up on August 8,...

Send flowers to the Hubbard family.