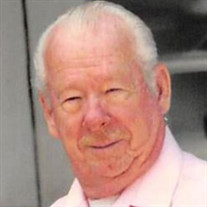 John Bryan Nickerson, 77, of Columbus, died at 3:14 p.m., Sunday, October 10, 2021, at Major Hospital in Shelbyville, Indiana. John was born March 27, 1944 in Columbus, the son of Forrest and Hattie (McKain) Nickerson. He married Judy (Simonson) Nickerson on July 8, 1984. She survives. John had been a member for 13 years at Dove Ministries in Columbus. He was employed for 32 years by the City of Columbus in the Utilities Department. John enjoyed hunting, fishing and hunting mushrooms as well. He will be fondly remembered for being a wonderful, loving husband, that thought the world of his family. The funeral will be at 11:00 a.m. Wednesday, October 20, 2021 at Jewell-Rittman Family Funeral Home with Pastor Michael Newland officiating. Calling will be from 9:30 until service time. Burial will be at Mt. Hebron Cemetery in Greensburg, Indiana. Memorials may be made to the American Cancer Society through the funeral home. Survivors include his wife, Judy; daughters, Deborah (Richard) Woggon, of Ohio and Gail (Daryl) Laker, of Shelbyville, Indiana, son, Kevin (Amanda Moore) Bostic, of Columbus, a brother, David (Mary) Nickerson of Columbus, a sister, Virginia Ray of Franklin, Indiana; 12 grandchildren and 9 great-grandchildren. He was preceded in death by his parents, his first wife, Charlotte (Crecelius) Nickerson, a daughter, Denise Brown; and sisters, Norma Robinson and Thelma Gates. Services were entrusted to the Jewell-Rittman Family Funeral Home. You are invited to view the video tribute, light a virtual candle and send a message to the family via the funeral home website www.jewellrittman.com.

The family of John Bryan Nickerson created this Life Tributes page to make it easy to share your memories.

Send flowers to the Nickerson family.