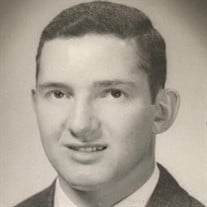 With profound sadness, we need to share with you the passing of John Ebert Mcintyre. John died at the age of 74, on September 22, 2021, in Houston, Texas. While John will be dearly missed by all that knew him, he would want everyone to know that he ran his race and is prepared and eager to be offered up and meet his maker. John was born on April 30, 1947, in Columbus, Indiana to Harry and Rebecca McIntyre. John lost his own father and mother at a very young age. While attending Columbus High School, John absorbed himself into the sport of wrestling and became a champion wrestler which morphed into a love and passion for all sports. He carried that passion through life. After graduating from High School, John attended Milligan University on a wrestling scholarship where he studied English. John’s career included managing a Savings and Loan Company in Naples, Florida, working in the flooring business, and owning flooring stores in Paris, Texas. His real love was umpiring baseball. He umpired in Paris, TX, and Columbus, IN, and was invited to umpire in various state little league championships. He also held offices in the Greater East Texas Baseball Umpires Association. John is preceded in death by his parents, Harry and Rebecca McIntyre of New Albany, Indiana, and his second wife, Patricia McIntyre of Paris, Texas. Before passing, John forged a 74-year trail of generosity, laughter, and wisdom. He sometimes lacked a filter but was a back-slapping jokester who loved spouting movie lines in his everyday conversations and by God he knew them all. He was a life learner and had a passion for reading both fiction and non with an extra special draw to politics and biblical reads. He had a marvelous memory. He loved his collection of baseball caps, his Mickey Mouse watch, and that darn remote control. Watching sports was his pastime. He also loved playing games with his kids and taught them the humorous art of cheating. John is survived by his sons Kevin McIntyre of Upland, CA & Chris McIntyre (Diane) of Tamarac, FL. Along with his daughters Patti Clifton (Chris) of Minneapolis, MN, Jennifer Hall (Cory) of Tomball, TX, and Laurie McIntyre of Eagan, MN. He is also survived by his loving brother and best friend, Harry McIntyre of Versailles, Kentucky. John was blessed with nine wonderful grandchildren Sydney, Bailey (Jon), Drake, Reese, Kendall, Jake, Nick, Madison & McKenzie John’s memorial service will be conducted by Reverand John Armstrong @ Grace Lutheran Church in Columbus, Indiana Friday, November 5, 2021 Visitation 3:00-3:30 PM - followed by a Memorial Service Have patience now and know that your devoted children and your loving brother will return you home to a little cemetery in Columbus, Indiana near your family and where you began your earthly journey. For those of you that would like to visit John, his Marker can be found at Garland Brook Cemetery in Columbus, Indiana ……………………………………………………………….. In lieu of donations, John McIntyre would hope that you will do an unsolicited act of kindness for some poor and unfortunate soul in his name. Jewell-Rittman Family Funeral Home in Columbus is handling arrangements. You may light a virtual candle and send a message to the family via this website.

With profound sadness, we need to share with you the passing of John Ebert Mcintyre. John died at the age of 74, on September 22, 2021, in Houston, Texas. While John will be dearly missed by all that knew him, he would want everyone to know... View Obituary & Service Information

The family of John E. McIntyre created this Life Tributes page to make it easy to share your memories.

With profound sadness, we need to share with you the passing...

Send flowers to the McIntyre family.