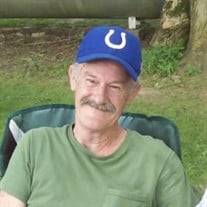 John D. Bryant, 69, of Hope, passed away Sunday March 27, 2022 at his home. He was born December 23, 1952 in Columbus to the late Johnny Lee and Blanche Mae (Jewell) Bryant. He married Gail Brooks on December 6, 1975 and she survives. John was a graduate of Columbus High School with the class of 1971. After graduation, he served his country for 4 years in the US Navy. Upon being honorably discharged from the Navy, he went on to serve another 20 years with the Indiana Army National Guard. He was the branch manager of Praxair and retired after 38 years of service. John enjoyed cheering for I.U. and the Colts. His favorite pastimes were fishing, golf, playing cards and bowling with the Friday Night Merry Mixers. However, the priority in life for John was always his family. Services will be held at 5:00 p.m. Saturday April 2, 2022 at Jewell-Rittman Family Funeral Home with military honors provided by the Bartholomew County Veterans Honor Guard. Visitation will be held on Saturday from 2:00 p.m. until 5:00 p.m. at the funeral home. Memorial contributions may be made in memory of John to a charity of the donor’s choice. John is survived by his wife, Gail; son, Nathan (Erin) Bryant, of Nineveh; daughters, Amber Hopkins, of Hope and Holly (Troy) Cowan, of Columbus; brother, Richard L. Bryant, of Columbus; sisters, Connie Schaefer, of Hartsville, Bonnie (Charlie) Roberts, of Columbus, Vickie Cross, of Columbus and Mary (Brian Foley) Goss, of Canyon Lake, TX. Also surviving are his grandchildren, Dylan Cowan, Nicole Hauer, Megan Cowan, Austin Cowan, Rachel Hopkins, Brooke Hopkins, Caleb Hopkins, Jackson Bryant, Mason Bryant and Ava Bryant and great grandchildren, Aliyah Cowan, Walker Cowan and Rome Hauer. John was preceded in death by his parents; son in law, Jason Hopkins; brother, Bill Bryant and sister, Sharon Hash. You are invited to view his video tribute, light a virtual candle of remembrance and send a message of condolence to the Bryant family via the funeral home website: www.jewellrittman.com

The family of John D. Bryant created this Life Tributes page to make it easy to share your memories.

Send flowers to the Bryant family.