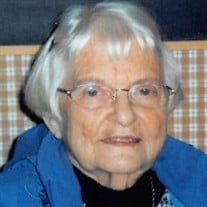 Joanne C. Connell, 91, of Central Avenue, died at 12:38 p.m. June 25, 2019, at Our Hospice of South Central Indiana Inpatient Facility. Joanne was born May 22, 1928, in Memphis, Tennessee, the daughter of Glenn and Marie Daugherty Caraway.  She married William Leo “Bill” Connell July 30, 1949, and he preceded her in death on April 1, 2006.   She was a member of St. Bartholomew Catholic Church. Joanne was actively interested in national, state and local politics and current events.  She was known for her wit and sharp intelligence. Joanne also loved sewing and quilting, and especially loved bridge and other card games. A Mass of Christian Burial will be conducted at 10 a.m. Friday, June 28, 2019, at St. Bartholomew Catholic Church with Father Clem Davis officiating. Calling will be 6 to 8 p.m.Thursday at Jewell-Rittman Family Funeral Home with a rosary service at 8 p.m. She will be laid to rest next to Bill at Garland Brook Cemetery. In lieu of flowers the family has asked that memorials be made to Our Hospice of South Central Indiana or their local hospice center. Survivors include her daughters, Suzan Connell of Lincoln, Nebraska, and Julie Furnish of Columbus; her son, Mark (Christy) Connell of Augusta, Michigan, and grandchildren, Rachel, Corey, Ashlee, Logan, Erin, Chelsea, Jacob and Matthew; and six great-grandchildren. She was preceded in death by her parents; husband, Bill; son, Gary Connell; and a son-in-law, Tom Furnish. You are invited to view her video tribute, light a virtual candle and send a message to the family via the internet.

The family of Joanne C. Connell created this Life Tributes page to make it easy to share your memories.

Send flowers to the Connell family.