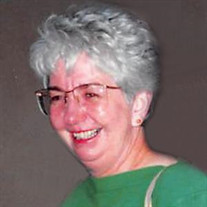 Joan M. Dugan, 88, of Columbus, died at 3:30 a.m. August 8, 2019, at Four Seasons Retirement Center. Joan was born in New York City, June 13, 1931, the daughter of David and Mary Pendegrast Scanlon. She married R. William Dugan Jr, October 9, 1954, and he preceded her in death October 7, 2002. While living in New York she worked at the top of the Empire State Building in the gift shop. After earning her Bachelor of Science degree from Georgian Court University in Lakewood, New Jersey, she taught at St. Columba Roman Catholic School, where she was a faithful member of the church. Joan loved her family, but was especially devoted to her grandchildren. A Mass of Christian Burial will be held at 10 a.m., Monday, August 12, 2019, at St. Bartholomew Catholic Church with Father Clem Davis officiating. Visitation will be 1 to 4 p.m. Sunday at Jewell-Rittman Family Funeral Home, with a Prayer Service at 4 p.m. Burial will follow the service at Garland Brook Cemetery. Memorial donations may be made to the Indiana Autism Society of America. She is survived by sons, David E. (Karen) Dugan of Columbus and Kevin P. (Charlotte) Dugan and a daughter, Kathleen M. (Mark Tourney) Dugan, both of Noblesville; a sister, Maureen Pignatelli of Long Island, New York; grandchildren, Matthew D. (Jen) Dugan of Greenfield, Patrick J. (Ali) Dugan of Indianapolis, and Casey R. Dugan, Edward D. Tourney and Hannah D. Tourney, all three of Noblesville; great-grandchildren, Bailey T. Dugan and Jack R. Dugan, both of Greenfield; and three nieces and nephews. She is preceded in death by her parents; husband, William; and a brother, David Scanlon Jr.

The family of Joan M. Dugan created this Life Tributes page to make it easy to share your memories.

Send flowers to the Dugan family.