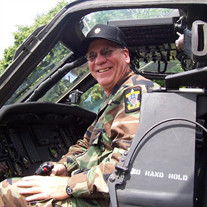 On Saturday, September 28, 2019, Colonel Jerry Wayne Green Sr., loving husband, father of four, and grandfather of six, unexpectedly passed at the age of 68. Jerry is survived by his wife, Sara (Freeman) Green; and brothers, John and Ricky Green. He was preceded in death by his older brother, Ray Green. Jerry was born on May 19, 1951, in Lafayette, Tennessee. He was a proud veteran of the Vietnam War, where he served two tours: one with the United States Marine Corps and the second with the United States Army. He continued his military career with the Indiana Guard Reserve, and volunteered with the J.R.O.T.C. program at Camp Atterbury. After his second tour in the Vietnam War, Jerry returned home and began driving semi-trucks with his cousin, and best-friend, Gerold Sparks, eventually meeting the love of his life, Sara. They were blessed with four children, all happily married: J.R. (Jayden) Green, Jason (Rachel) Green, Jessica (Nick) Champlin, Jacob (Kayla) Green; and grandchildren, Alex, Logan, Oliver, Emaline, Wesley, and Ethan. Jerry loved engaging with his children in youth sports. He was a dedicated coach, mentor, umpire, bantam football league president and above all, a family favorite on and off the football field, baseball diamond, and swimming pool. His professional career included serving Bartholomew County as a Facility Manager, overseeing the restoration and renovation of the County Courthouse and Veteran’s Monument located on the County Courthouse Lawn. All that knew Jerry felt his warm, loving heart and were touched by his wisdom. He will be remembered for his passion, laughter, loyalty, generosity, love, and his well-known creed to ‘visitors’ in his house: “Here’s the fridge and there is the bathroom. Remember this, because the first time you’re a guest and the second time you are family!” The funeral service will be at 11 a.m. Friday, October 4, 2019, at Jewell-Rittman Family Funeral Home with Dick Yeaton officiating. There will be military honors provided by the Bartholomew County Veterans Honor Guard. Visitation will be Thursday 4 to 8 p.m. at the funeral home and one hour prior to the service Friday. There will be no burial, cremation is planned.

The family of Jerry Wayne Green Sr. created this Life Tributes page to make it easy to share your memories.

Send flowers to the Green family.