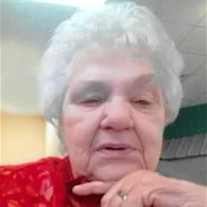 Janet Diane Knott Waggoner Walls, 85, of Waycross Drive, died at July 29, 2019, at her home. Janet was born February 14, 1934, in Seymour, the daughter of Carl Knott and Rowena Alice Moore Knott. She married Stanley Allen Waggoner in April of 1951, and he preceded her in death December 17, 1962. She then married Daniel John Walls in December of 1975 and he preceded her in death August 11, 1999. She was previously employed at Columbus Regional Hospital, Columbus Convalescent Center and Hickory Creek Nursing Home before retiring from Home Health Care. Janet enjoyed going to garage sales, watching NASCAR and Indianapolis Colts football. She was a member of Cornerstone Baptist Church and enjoyed going to Bible study. She was always disappointed that she didn’t win the lottery. The funeral will be conducted at 10 a.m. Saturday, August 3, 2019, at Jewell-Rittman Family Funeral Home with the Rev. Virgil Clotfelter officiating. Calling will be 5 to 7 p.m. Friday and one hour prior to the service. Burial will be at Garland Brook Cemetery. Memorials may be made to the donor's choice of charity. Survivors include her sons, Larry (Sherry) Waggoner of Columbus, Mark Allen (Sharon) Waggoner of North Vernon, Scott Allen (Terri) Waggoner of Seymour and Brian (Ava) Walls of Elizabethtown and daughter, Julie Diane (Eldon) Alexander of Straughn, Indiana; stepdaughters, Marlene Greenlee, Judy Hatton and Sherri Baker, all of Florida; 18 grandchildren; many great-grandchildren; and several great-great-grandchildren. She was preceded in death by her parents; her first husband, Stanley Waggoner and her second husband, Daniel Walls; and brothers, Don Knott and Charles Knott and sisters, Shirley Walls and Sharon Cox.

The family of Janet Diane Knott Waggoner Walls created this Life Tributes page to make it easy to share your memories.