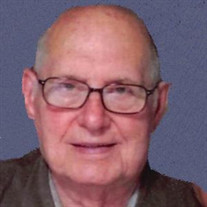 Rev. James B. Wilson (J.B.), of Columbus, took his heavenly flight at 10:11 a.m. September 7th, 2020, at Our Hospice of South Central Indiana. He passed peacefully with his nurse and his nurses aid by his side. J.B. was born December 6th, 1933, in Edmonton, Kentucky, the son of John Burton and Loney Jane (Jessie) Wilson. He married his beautiful loving wife, Thelma (England) Wilson, January 26, 1952. She proceeded him in death August 25, 2020. He longed to be with her and missed her dearly. J.B. is survived by his daughter, Debra (Danny) Hoagland of Columbus; son-in-law, Danny (Bonita) Harper of Columbus; grandchildren, Trina (John) Newton of Hope and Eric (Amanda) Harper of Hartsville; great-grandchildren, Ineshia (Jason) Foddrill of North Vernon, Kody Newton and Kristina Newton of Columbus, Kindra (Joey Hendricks) Newton of Columbus, and Waylon Harper and Jovie Harper of Hartsville; and great-great-grandchildren, Landin Foddrill and Alivya Foddrill of North Vernon, and Allyson Newton of Columbus. He also had several great-grand exchange students that loved him as their own grandpa; his sister-in-law, Zelma Fields from Glendale, AZ; and several nieces and nephews. J.B. loved life. He loved his family and friends. He was always calling and checking on them. He loved playing music, listening to bluegrass gospel music, singing, praising The Lord, ministering, and preaching the gospel. He preached his last sermon August 9, 2020. He was a faithful member of Jewell Village Separate Baptist Church where he pastored for many years until he retired around four years ago. He had been a minister for more than 60 years. He worked at the Golden Foundry pouring hot iron for 40 years before retiring from there in 1995. J.B. Was preceded in death by his parents; his loving wife of 68 years; his daughter, Jeanette Sue Wilson-Harper; great-grandchildren, Katelyn, Kayla, and Karina Newton; and 12 brothers and sisters, Kinnard Wilson, Roland Wilson, Elbert Wilson, Lawrence Wilson, Lewis Wilson, Carlies Wilson, Gervis Brown, Elmer England, Annie Jessie, Edna Gregory, Ruby Hogan, Mary Orlena Poynter. There will be a private funeral service for immediate family only due to Covid related issues. The family does apologize, but feels this is best for their family at this time. J.B. and his wife Thelma did everything together. It seems only fitting that their services will be held the same day. The family has decided that the services will be live streamed through the Jewell-Rittman Family Funeral Home website. Please visit www.jewellrittman.com, below the obituary pictures, there will be a a link to join the live stream at 9:25 a.m. September 9, 2020. Memorial contributions may be made to Our Hospice of South Central Indiana, 2626 17th Street, Columbus, Indiana, 47201.

Rev. James B. Wilson (J.B.), of Columbus, took his heavenly flight at 10:11 a.m. September 7th, 2020, at Our Hospice of South Central Indiana. He passed peacefully with his nurse and his nurses aid by his side. J.B. was born December 6th,... View Obituary & Service Information

The family of Rev. James B. "J.B." Wilson created this Life Tributes page to make it easy to share your memories.