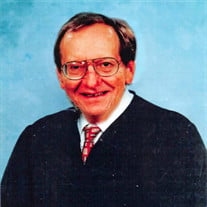 The Honorable Judge James William Long, 85, of Columbus, died at 4:36 p.m., Sunday, March 14, 2021, at his home. James was born January 24, 1936, in Columbus, IN, the son of Charles William and Cora Nell (Summa) Long. He married Sandra Finnegan-Stier Long on January 3, 1989. In addition to his distinguished career as a lawyer, Judge Long presided over Bartholomew County Superior Court 1 from 1977 until 1989 in Columbus, Indiana. Prior to going to law school, Judge Long taught at Kent School in Columbus, Indiana, and he continued to teach at IUPUC after becoming a lawyer. Judge Long was a 50-year member of the St. John’s Masonic Lodge #20, F&AM, and a 32nd degree member of the Ancient Accepted Scottish Rite, Valley of Indianapolis. When he wasn’t working hard in the community, you could find Judge Long enjoying time on the golf course, reading books about history, or working on one of his many art projects. He was a friend to Bill W. for 34 years. James was a loving father, caring husband and devoted to his family. His grandchildren absolutely worshipped the ground he walked on. He will be greatly missed by all who knew and loved him. Services for Judge Long will be private. A public memorial service will be held at a later date. Memorials may be made to Our Hospice of South Central Indiana or Columbus Fellowship Club through the funeral home. Survivors include his wife; a son, Gregory Edward (Shari) Long of Columbus; a daughter, Pamela Sue Long of San Francisco, CA; stepdaughters, Kathleen (Timothy) Whipker of Azalia and Colleen Saylor of Whiteland; a brother, Charles Richard (Sandy) Long of Clinton, CT; grandchildren, Madison Elizabeth Long of Columbus, Margaret Paige (Jonathan Dominguez) Long of Columbus, Maxwell Joseph Whipker of Columbus, Elenor Irene Whipker of Columbus, Marcella Rose (Fiancé, Tyler Elliott) Whipker of Anderson, and Ciara Kathleen Saylor of Whiteland. He was preceded in death by his parents. Services were entrusted to the Jewell ~ Rittman Family Funeral Home.

The family of James William Long created this Life Tributes page to make it easy to share your memories.

Send flowers to the Long family.