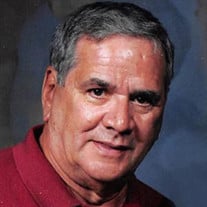 James R. Gordon, 84, of Columbus, died at 2:55 a.m. March 18, 2020, at Our Hospice of South Central Indiana Inpatient Facility. Jim was born August 24, 1935, in Benwood, West Virginia, the son of Harry and Marie Klieves Gordon. He married Miriam E.Webb October 15, 1954. He moved to Columbus to work with the Remington Rand Corporation and brought the rest of his family to Columbus in the summer of 1963. Jim purchased the Remington branch and began Jim Gordon Inc. in 1973. The business expanded to Bloomington in 1976. Jim was also very successful with his commercial real estate investments. Jim loved watching Indiana University basketball and spending time on the boat on Grandview Lake. He especially loved being with his children, grandchildren and great-grandchildren. Throughout his life Jim helped many people. His family describes him as charismatic, hardworking and an entrepreneur. Jim was a wonderful provider, never met a stranger and treated his employees like family. A member of The Masonic Lodge, Scottish Rite, Shrine, Elks and the Moose, Jim was a generous and loyal philanthropist. His donations to area athletics and arts organizations were numerous. Visitation and funeral services will be private with the Rev. Howard Boles officiating at the Jewell-Rittman Family Funeral Home. Entombment will be at the Garland Brook Cemetery mausoleum. Memorial donations may be made by check to Our Hospice of South Central Indiana or Riley Children’s Hospital in memory of Jim through the funeral home: Jewell-Rittman Family Funeral Home, 3855 25th Street, Columbus, IN, 47203. Survivors include his wife, Miriam; sons, James R. (Brenda) Gordon Jr. of Columbus, Robert D. (Pamela) Gordon of Bloomington, Glen E. (Donna) Gordon of Columbus, and Mark A. (Janie) Gordon of Columbus; and brothers, Thomas Gordon of Ohio, John Gordon of West Virginia and Walter Gordon of Florida. He was ‘Pap” to grandchildren, Richard (Lesli) Gordon, Scott (Michelle) Gordon, Brent (Sara) Gordon, Robert (Randi) Gordon, Stefanie (Joshua) Vargo, Allison (Jon) Cline, Erin Gordon, Andrew Gordon, Amy (Aaron) Shaff and Christopher (Kayla) Gordon and 17 great-grandchildren. He was preceded in death by his parents; eight brothers and two sisters. Due to the Corona virus pandemic and the concern for everyone’s well being, visitations and funeral services must be limited.

The family of James R. Gordon created this Life Tributes page to make it easy to share your memories.

Send flowers to the Gordon family.