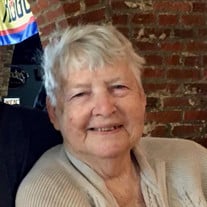 Jacqueline Lee Nentrup-Line, 92, of North Vernon , Indiana, passed away at 2:20 pm, April 15, 2021, at the Columbus Hospice Facility. She was born April 26, 1928 in Columbus Indiana, the daughter of the late Guy Sweeney and Rhea Sweeney. She married Russell Nentrup on April 6, 1953. they were married until his death on April 10th, 2007. Later in life, she married Glenn Line on September 3rd, 2017. Glenn died December 24, 2020. Jacqueline was known as Jackie by close friends, relatives and many acquaintances. Jacqueline was a loving wife, mother and grandmother whose most important thing in life revolved around her family. She was a special lady. Her children were the center of her life and she did most of everything with a thought toward their best interests. She enjoyed gardening, antiquing & hunting for vintage treasure. She was an active member of her community and volunteered with several outreach programs such as teaching literacy through the Laubach Literacy series for teaching reading and writing to adult learners. She owned a variety store in North Vernon, that also sold candies and miscellaneous other merchandise. Her husband and daughter also, each owned stores on the same block; an Antique Store, and an Army Surplus Store. One of her main hobbies was Art, and she became proficient in oil painting. She was a member of Vernon’s American Heritage Artist group, and showed her paintings there. Jacqueline also studied genealogy, especially as it pertained to her family history. She created several books of her family genealogy, and gave a copy to each child. Jacqueline enjoyed traveling to many places, and made several trips to Hawaii, Canada, other states and local communities. She considered Bradenton, Florida to be her home away from home. She and her husband, Russell, purchased a home in Bradenton, for them stay through the colder months. They both loved and enjoyed the warm Floridian climate. Jacqueline is survived by her children Trent (Jan) Nentrup of Hope, Jad (Vicki) Nentrup, of Columbus, Jill Nentrup-Perry of Zenas, Guy (Vickie) Nentrup of North Vernon, Sister Shirley Marsh of Goshen, Indiana, grandchildren Craig (April) Nentrup of Columbus, Corey (Candice) of Columbus, Keith Perry of Zenas, Kevin (Jackie) Perry of Nineveh, Eric Nentrup of Indianapolis, Brian (Stephanie) Nentrup of Fairland, Jennifer (Lance) Erb of Columbus, Christopher (Stacy) Nentrup of North Vernon, Courtney (Matt) Roberts of North Vernon. She also had 14 great grandchildren, with many nieces & nephews. Also, step children Beverly Hoagland of Columbus and John Line (Anne) of Indianapolis, James Line (deceased). She was preceded in death by her parents & husbands. A graveside service will be held at Garland Brook Cemetery, section 76. It will be at 2:30, on Tuesday 4-20-2021, with Ann Thomas, senior minister of East Columbus Methodist Church, officiating. Calling will be from 12 pm until 2 pm, 4-20-2021 at the Jewell-Rittman Family Funeral Home. Burial will be at Garland Brook Cemetery. Memorials may be made to the organization of your choice. Jewell – Rittman Family Funeral Home would like to thank everyone in advanced for wearing masks and practicing social distancing while attending gatherings. You are invited to view her video tribute after time and date, light a virtual candle and send a message to the family via the internet. www.jewellrittman.com

Jacqueline Lee Nentrup-Line, 92, of North Vernon , Indiana, passed away at 2:20 pm, April 15, 2021, at the Columbus Hospice Facility. She was born April 26, 1928 in Columbus Indiana, the daughter of the late Guy Sweeney and Rhea Sweeney.... View Obituary & Service Information

The family of Jacqueline "Jackie" Nentrup-Line created this Life Tributes page to make it easy to share your memories.

Send flowers to the Nentrup-Line family.