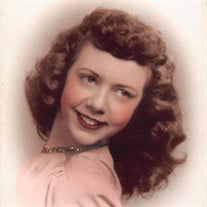 Jacqueline L. Sabatino, 92, passed away on May 3, 2022, at her residence in Columbus, Indiana. She was born September 17, 1929, in Dayton, Ohio, the daughter of Richard Wayne Tankersley and Natalie V. Tankersley. Mrs. Sabatino was a 1946 graduate of Wilbur Wright High School in Dayton Ohio. She worked as a secretary for Leland Electric Company and for Master Electric Company in Dayton, Ohio until 1951, devoting herself thereafter to being a homemaker and rearing her two children. After relocating to Columbus, Indiana in 1961 she worked as a medical records transcriber for several local medical practices, including those of Jerome Herrberg, M.D and Charles Cure, M.D. She was a long-time member of First Christian Church, after which she became a member of the local Reformed Presbyterian Church until her death. She enjoyed sewing and making her own tailored clothes, being a homemaker, and, above all, spending time with her family. She is survived by a son, Mark (Linda) Sabatino, and grandchildren Sarah Sabatino (Drew Worthen), Nicholas Sabatino, Michael (Rebekah) Sabatino, all of Greenwood, Indiana; and Anne (Jacob) Hardy of Lexington, Kentucky, as well as great-grandchildren, Matthew Sabatino, and Rori Sabatino of Greenwood, Indiana, and by many nieces and nephews. She was preceded in death by her husband of 72 years, Marvin R. Sabatino, her parents, a son, Matt (Susan) Sabatino, a brother Richard (Elaine) Tankersley, and a sister Robin (Fred) Robinson. It was Mrs. Sabatino’s request that she be interred as soon as practical following her death without formal ceremonies. A graveside service conducted by Reverend Joel Hart will be held on Saturday, May 14, 2022, at 11:30 A.M EDT at Miami Valley Memory Gardens, 1639 E. Lytle 5 Points Road, Centerville, OH 45458 with burial immediately following. Arrangements have been entrusted to the Jewell-Rittman Family Funeral Home. You are invited to light a virtual candle of remembrance and send a message of condolence to the Sabatino family via the funeral home website: www.jewellrittman.com.

Jacqueline L. Sabatino, 92, passed away on May 3, 2022, at her residence in Columbus, Indiana. She was born September 17, 1929, in Dayton, Ohio, the daughter of Richard Wayne Tankersley and Natalie V. Tankersley. Mrs. Sabatino was a 1946... View Obituary & Service Information

The family of Jacqueline L. Sabatino created this Life Tributes page to make it easy to share your memories.

Send flowers to the Sabatino family.