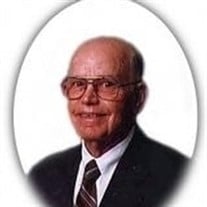 Hoyt G. Burns May 21, 1923 - March 24, 2003 Hoyt G. Burns, 79, of Columbus died at 8:10 A.M. Monday, March 24, 2003, in Bartholomew County. Mr. Burns was born in Paducah, Kentuck then moved to Columbus where he spent the rest of his life. Hoyt was a Navy Veteran and an avid golfer at Greenbelt Golf Course. He married his wife Mildred P. Conway on February 20, 1945. Suvivors are his wife, son, Gerald Burns of Columbus, daughter Kathryn E. Armstrong of Columbus, brother Dale Burns of Edinburgh, IN, sister Phyllis Paul of Edinburgh, IN, grandchildren, Shannon Royer of Greenwood, IN; Gretchen Brand of Greenwood, IN; Meghan Burns of Columbus, great-grandchildern Josie Royer and Ellie Brand. He was preceded in death by his sister Wilma Schaub. Funeral Information FUNERAL: Services will be held at Jewell-Rittman on Thursday, March 27, 2003 at 10:00 a.m. with Pastor Mark Teike. VISITATION: Wednesday, March 26 from 4:00 to 8:00 p.m. at Jewell-Rittman Family Funeral Home. MEMORIALS: May be made to the Hospice of South Central Indiana.

The family of Hoyt G. Burns created this Life Tributes page to make it easy to share your memories.

Send flowers to the Burns family.