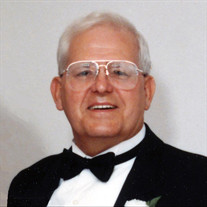 Henry V. Pietras, 90, of Columbus, IN, passed away on Wednesday, December 15, 2021, surrounded by family. He was born on December 6, 1931, in Wheeling, WV, the son of the late Adam and Blanche (Zapalski) Pietras. He graduated from Wheeling Central Catholic High School, married the former Rose Ann Fabjan in 1952, and recently celebrated his 69th wedding anniversary. Henry began working at Sylvania in Wheeling at age 18, and moved with the family to Reidsville, NC, from 1965 until 1969. He and the family lived in Newark, OH, from late 1969 until 1975. In 1975 the family moved to Columbus, IN, where he worked for Arvin Industries until he retired in 1993. After retirement he worked for 15 years at the Indianapolis Motor Speedway. Henry was a member of St. Bartholomew Catholic Church in Columbus, where he was a Eucharistic Minister. He joined the Knights of Columbus in 1975, became a Grand Knight in 1983, and remained a member of the K of C for the rest of his life. In addition to his parents, he was preceded in death by brothers and sisters, Stanley (Blanche) Pietras, Jenny (Stanley) Helminski, Paul Pietras, Emily (Joe) Wolfe, Valeria (Stanley) McGuire, and Mary (Thomas) Robbins. Henry is survived by his wife, Rose Pietras; his children, John (Nancy) Pietras, Michael (Rebecca) Pietras, Henry (Sandy) Pietras, Christine (Rob) Hood, and Carol (Dan) Hebenstreit; his eight grandchildren, Julia (Jabari) DeCoteau, Anna Pietras, Joe Pietras, Jennifer Pietras, Sarah Hood, Sophie Hood, Maridith Hebenstreit, and Mitchell Hebenstreit; numerous nieces and nephews; and many dear friends. Henry’s family was the most important thing in his life. He was an avid card player, and loved dancing, playing games with his grandchildren, and vacationing with his wife, children, and grandchildren. The viewing will be held on Monday, 20 December, from 5:00-7:30 PM at the Jewell-Rittman Family Funeral Home in Columbus, followed by the Rosary 7:30-8:00 PM. Mass of Christian Burial will be held on Tuesday, December 21 at 10:00 AM, at St. Bartholomew Catholic Church in Columbus, with Fr. Chris Wadelton officiating. Burial attended by family will follow immediately at Garland Brook Cemetery in Columbus. Funeral Home and Church COVID protocols will be followed. The family would like to thank the staff at Our Hospice of South Central Indiana. They could not have been more helpful or caring. God bless them. In lieu of flowers, memorial contributions can be made to St. Bartholomew Catholic Church, 1306 27th Street, Columbus, IN, 47201, or Catholic Charities USA, 2050 Ballenger Ave., Suite 400, Alexandria, VA, 22314. catholiccharitiesusa.org.

Henry V. Pietras, 90, of Columbus, IN, passed away on Wednesday, December 15, 2021, surrounded by family. He was born on December 6, 1931, in Wheeling, WV, the son of the late Adam and Blanche (Zapalski) Pietras. He graduated from Wheeling... View Obituary & Service Information

The family of Henry V. Pietras created this Life Tributes page to make it easy to share your memories.

Send flowers to the Pietras family.