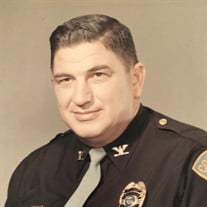 Glenn F. Line, 92, of Columbus, passed away at 7:30 p.m. Thursday, December 24, 2020 at St. Vincent Hospice. Glenn was born on September 3, 1928 in French Lick, IN to Herbert Line Sr. and Elizabeth Byerley Line. On his 89th birthday he married Jacqueline Nentrup Line September 3, 2017. After Glenn graduated from High School he enlisted and served 2 years in the US Navy. In 1950 Glenn was hired as a patrolman with the Columbus Police Department. During his 22 years with the department, he held positions of Lieutenant, Sergeant, Captain and was appointed Chief of Police from 1964-1971 under Mayor Eret Kline. In 1962 he graduated from Southern Police Institute and went on to serve on the Indiana Law Enforcement Training Board from 1969-1971 and President of the Indiana Association of Chiefs of Police. His passion for law enforcement and the youth led him to become very involved with the Police Athletic League (P.A.L) and the Pistol Team which earned many awards over the years. After leaving the department in 1972, Glenn worked as an inspector for the Alcoholic Beverage Commission and later as an investigator for the Bartholomew County Welfare Department. Glenn’s sense of humor, kindness and bear hugs will be missed greatly by all that knew him. In keeping with the families wishes cremation is planned. At a later date, inurnment will be held at Garland Brook Cemetery with Police honors with military honors by the Bartholomew County Veterans Honor Guard. Memorial contributions may be made to the Fraternal Order of Police P.O. Box 204 Columbus, IN 47202, benefiting Countless Youth Programs. Survivors include his wife Jacqueline Line; children, Beverly Hoagland of Columbus and John (Ann) Line of Indianapolis; grandchildren, John Line II of Massachusetts, Kevin Line of Bloomington, Breanna Line of Indianapolis, Kristina Line of Massachusetts; 6 great grandchildren; step-children, Trent (Jan) Nentrup of Columbus, Jad (Vickie) Nentrup of Columbus, Guy (Vicki) Nentrup of North Vernon, Jill Nentrup Perry of Westport, Steve Rager of Florida, Mike Rager of Florida, Dan Rager of Columbus and Karen Penrod of Columbus; a brother, Buryl (Betty) Line of Columbus and a sister, Alma McQueen of Hope. Glenn was preceded in death by wives, Evelyn Padgett Line June 14, 1958, Marilyn Ostick Line April 3, 2001 and Maxine Rager Line January 21, 2008; a son, James F. Line; step-son, Dave Rager; son-in-law, Pete Hoagland; brothers, Earl Line, John Line, Herb Line and Irvin Kintner; sisters, Dorothy Haddix, Martha Nichols and Blanch Lind and a granddaughter- Brittany Line. Arrangements were entrusted to the Jewell-Rittman Family Funeral Home.

The family of Glenn F. Line created this Life Tributes page to make it easy to share your memories.

Send flowers to the Line family.