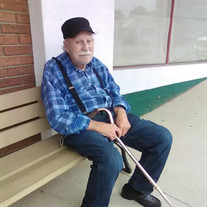 Glendal R. Hadley, 90, of Columbus, passed away December 8, 2020, at Our Hospice of South Central Indiana Inpatient Facility. Glen was born February 26, 1930 in Jamestown, Kentucky, the son of Arthur and Lucy Davis Hadley. He married the love... View Obituary & Service Information

The family of Glendal R. Hadley created this Life Tributes page to make it easy to share your memories.

Send flowers to the Hadley family.