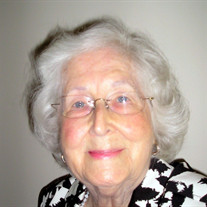 Geraldine “Jerri” Meyer Mosier Young, 87, of Columbus, died February 20, 2020, at Covered Bridge Health Campus in Seymour. She was born February 21, 1932, in Tefft, Indiana, to the Rev. Arvey R. and Ethel O. Brown Meyer. She married Charles E. Young May 13, 1973; he preceded her in death in 1998. Jerri had been employed as an executive secretary for Cummins in the purchasing, military contracting and international finance departments before retiring January 1, 1988. She enjoyed traveling, reading, collecting and selling old books, and had owned and operated antique booths at various locations. In her later years Jerri loved designing, creating, and selling her one-of-a-kind handmade jewelry. She is survived by two children, Michael (Susan) Mosier of Lexington, Kentucky, and Karen (Jim) Ludeman of Columbus; grandchildren, Lindsay Carter of Indianapolis, Jeremy Carter of Texas, Ryan Mosier of Ohio, Alissa Russell of Minnesota, and Kelley McDonald of Columbus; and four great-grandchildren. She was preceded in death by her parents; husband, Charles; sons, Randy and Terry Mosier; and a brother, Ronald Meyer. Cremation is planned and there will be no public services. A private inurnment will be held at Resthaven Cemetery, Edinburgh. Arrangements provided by Jewell-Rittman Family Funeral Home.

The family of Geraldine "Jerri" Young created this Life Tributes page to make it easy to share your memories.

Send flowers to the Young family.