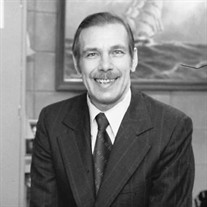 George L. McKinney, 89, passed away Tuesday, October 12, 2021 at Our Hospice of South Central Indiana in Columbus. George was born in Indianapolis, Indiana on May 11, 1932, the son of James and Hazel Lind McKinney. He married his beloved wife Norma Mae Wallace in 1957 and the couple had three daughters. George attended school in Columbus, graduating from Columbus High School in 1950. He then attended Indiana University and Butler University, graduating with a Bachelor of Science in Education in 1955. He later earned his masters. He was an educator in the Columbus area for many years, encouraging young students to be their best. He started teaching at Petersville Elementary School, moving to Southside Junior High as a counselor when it opened and later transferring to Northside Junior High. During his 34 years of education, he was a teacher, advisor, counselor, dean and guidance director. He was a member of the Bartholomew County School Corporation Retired Teachers Association and a lifetime member of the National Education Association. He also served as president of the local chapter of the Metropolitan Exchange Club. He was a member of the First United Methodist Church, where he was both married and baptized. He taught elementary Sunday School with his wife and practiced his beliefs by reading a verse from the Bible every night before going to bed. George loved sports, from the junior high to professional levels. Most of all he loved watching the Yankees play and even got to see the great Joe DiMaggio play, his sports idol. He also loved Indiana basketball: Indiana University, Butler, the Colts and the Pacers. Known for writing poems for his family, George also wrote poems about Indiana sports that appeared in the local paper on several occasions. Among the other things that brought George pleasure was music, particularly Frank Sinatra. He also collected glass dogs and traveled. Above all, George was a family man who loved his wife, children, grandchildren and extended family. His children say he was definitely the patriarch, always concerned about their well-being, making sure they had the comforts of life. He was devoted and caring. George is survived by his three daughters, Deb Risinger, Vicki (Mark) Huckaby and Susan (Eric) Wilcox; grandchildren Amie (Chris) Jordan, Justin (Janine) Ebert, Joel (Bethany) Huckaby and Ashley (Shantal) Huckaby, Rachel Wilcox and Miley Wilcox. He also had several great-grandchildren: Nate (Laura) Spaugh, Nick Spaugh, Nora-Li Spaugh, Noah, Devon and Jewan Jordan, Thad Huckaby, Carmen Sawyer, Colin and Emma Ebert, Ashton Huckaby, Madelyn Huckaby and two great-great grandchildren, Penelope Jett and Theodore Spaugh. He is preceded in death by his loving wife, his parents, two brothers, James and Lawrence and a sister, Jean Patrick. Funeral services for George will be at 10:30 a.m., Saturday, October 16 at Jewell-Rittman Funeral Home with Pastor Sarah Campbell officiating. Visitation will be from 9 a.m. until the start of the funeral on Saturday. To protect family and friends, masks are encouraged. Burial will follow in Garland Brook Cemetery immediately after the service. In lieu of flowers, George asked that donations be given to the charity of your choice, Our Hospice of South Central Indiana or to the First United Methodist Church of Columbus. The family would like to express appreciation to the nurses and personnel on the fourth floor at the Columbus Regional Hospital and to those at Our Hospice of South Central Indiana who cared for George. You are invited to view George’s video tribute, light a virtual candle and send a message to the family via the funeral home website. For those who cannot attend, the service will be live-streamed.

George L. McKinney, 89, passed away Tuesday, October 12, 2021 at Our Hospice of South Central Indiana in Columbus. George was born in Indianapolis, Indiana on May 11, 1932, the son of James and Hazel Lind McKinney. He married his beloved wife... View Obituary & Service Information

The family of George McKinney created this Life Tributes page to make it easy to share your memories.

Send flowers to the McKinney family.