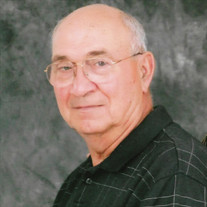 George Crase Jr., 80, of Columbus, passed away October 9,2020 at Columbus Regional Hospital. George was born April 17, 1940 in Letcher, Kentucky the son of George and Nora (Caudill) Crase. He married Helen L. Brown on February 20, 1971. George retired from Reliance Electric Company after 35 years of service and prior to his career served his country in the U.S. Army. He enjoyed hunting, fishing, working in his garden, and spending time with his family. He is survived by his wife Helen, whom he shared 48 wonderful years together; and his son, Brian (Emily) Crase of Columbus; grandchild Brandon Crase; sisters and brothers, Frances, Herman and Tom of Letcher, Kentucky, Arthur “Toby” of Hamilton Ohio along with many nieces and nephews. George was preceded in death by his parents; brothers and sisters Lutichia, Lee, Johnny, Glenn, Russell, Doris Yvonne, Jim, Drew, Altia, Troy, Dania, and Blaine. Visitation will be held at Jewell-Rittman Family Funeral Home, 3855 25th Street, Columbus Indiana on October 13, 2020 from 4 - 8 p.m. The Funeral Service will be held at Seventh Street Church of God, officiated by Pastor Jerry Ballard located at 2005 7th Street, Columbus, Indiana at 1 p.m. on October 14, 2020 followed by a burial service at Garland Brook Cemetery.

The family of George Crase Jr. created this Life Tributes page to make it easy to share your memories.

Send flowers to the Crase family.