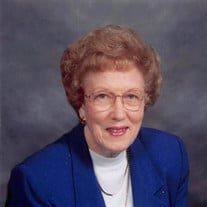 Geneva B. Timmons, 97 of Columbus passed away on Saturday, November 13, 2021 at her home. She was born November 12, 1924 in Laurel, Indiana, the daughter of James and Mary (Alexander) Belcher. She married Robert D. Timmons August 27, 1950. The couple had a daughter, Maryann (Jerry) Hayes, of Columbus. Geneva was an accomplished woman. Not only was she a loving wife and mother, she earned her Associate’s Degree and went on to become a vice president of a manufacturing company. She started her career at Luken’s Drugs in Richmond, Indiana and was later employed in the same town at Wallace Metal Products. She moved to Columbus in 1968, first going to work for Dunlap Construction, later retiring from Hartup Tool, Inc. as vice president. She loved being involved in her community. Geneva was an active member of North Christian Church for 50 years, a celebrated 60-year member and officer of Kappa Delta Phi Sorority, and spent many hours volunteering for Our Hospice of South-Central Indiana for 11 years. She was a member of the Nite Timers Home Ec. club as well. Outside of work and friendships, she spent time with her hobbies. She was an accomplished seamstress and enjoyed ceramics. In her lifetime she traveled to 23 countries & numerous places in the US but her greatest joy was participating in her grandchildren’s activities. Services for Geneva will be at 2:00 p.m. Friday, November 19 at Jewell-Rittman Funeral Home in Columbus. Visitation will be one hour prior to the service, from 1:00 to 2:00 p.m. Friday. Burial will immediately follow in Garland Brook Cemetery. The family asks that memorial contributions may be made to the donor’s choice of charity. Geneva is survived by her daughter, Maryann, son-in-law Jerry, and her grandchildren Andrea (Dustin) Minor of Franklin, Tennessee and Robert (Chelsea) Hayes, also of Columbus. In addition, she has five great-grandchildren, Brevin Minor, Graham Minor, Paisley Minor, Aiden Hayes and Quinn Hayes. She is also survived by a sister, Lorene Reynolds of Florida; nephews Tony (Laurie) Reynolds of Greeneville, TN, David (Kathy) Riggs of Muncie, IN; nieces Sheri Mankin of San Diego, CA and Susan (Jim) Burt of Titusville, FL. She is preceded by her husband, Robert on October 21, 1986; two brothers, James Belcher, Jr. and Paul Belcher; and a sister, Wilma Belcher. You are invited to view Geneva’s video tribute, light a virtual candle and send a message to the family via the funeral home website.

Geneva B. Timmons, 97 of Columbus passed away on Saturday, November 13, 2021 at her home. She was born November 12, 1924 in Laurel, Indiana, the daughter of James and Mary (Alexander) Belcher. She married Robert D. Timmons August 27, 1950. The... View Obituary & Service Information

The family of Geneva B. Timmons created this Life Tributes page to make it easy to share your memories.

Geneva B. Timmons, 97 of Columbus passed away on Saturday, November...

Send flowers to the Timmons family.