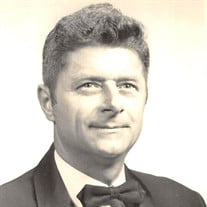 Fred Paul Ford, 93, of Columbus, passed away at 9:10 a.m. Sunday January 10, 2021 at Columbus Transitional Care. He was born July 26, 1927 in Deputy, Indiana to the late John C. and Bertha (Lawler) Ford. Fred joined the National Guard in 1947 in a few months, he decided to join the US Army during World War 2 as a paratrooper and volunteered for secret projects with the nuclear testing in the South Pacific Islands until he was discharged. After the war, he worked at Gas City in a glass factory where he met his first wife, Jean Wright and moved to Columbus. He retired from Columbus Engine Company after 30 years of service. Fred was a master mason for over fifty years and was a member of Hanover Masonic Lodge # 652 F & AM. Fred loved gardening and he loved raising the biggest melons and onion, which he loved to eat. He loved going to Canada fishing and deer hunting in Kentucky with his best friends, Ron and Jan Irwin at their home. Fred was on the go all the time and never stood still. Fred is survived by his sister, Martha Jo Cooper, of Columbus; brothers, John Ford of Columbus and Arnold “Pete” Ford of Deputy and a step-son, Don (Anita) Davis of Columbus. Fred also is survived by his nieces and nephews, Keith Cooper, Dana (Craig) Fields, Kenny Ford, Roger Ford and Peggy Case. He was preceded in death by his parents, a brother, Wallace Ford and a nephew, Gary Ford. Funeral services will be held at 1:00 p.m. Thursday January 14, 2021 with Larry Tingle officiating at Jewell-Rittman Family Funeral Home with visitation beginning at Noon. Following the service, he will be entombed at Garland Brook Mausoleum with military honors provided by the Bartholomew County Veteran’s Honor Guard. The funeral service will be live streamed at 1:00 p.m. Thursday on the funeral home website. You are invited to light a virtual candle and send a message of condolence via the funeral home website.

The family of Fred Paul Ford created this Life Tributes page to make it easy to share your memories.

Send flowers to the Ford family.