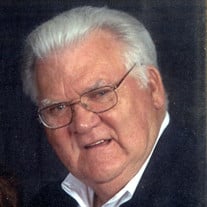 Fred R. Caudill Sr., 82, of Columbus, passed away on Thursday, December 3, 2020 at Columbus Regional Hospital. Fred was born in Benham, KY on August 5, 1938 to William Riley Caudill and Thelma Hager Caudill, he married Carol Ann Stump on December 26, 1984. Fred was an Army veteran and retired from Cummins Engine Company. He was a member of Asbury United Methodist Church, New Washington Masonic Lodge #167 and the Columbus Corvette Club. Some of his greatest joy came from riding his Harley Davidson Motorcycle, driving his Corvette and spending time with his children and grandchildren. There will be a private family service for Fred on Tuesday, December 8, 2020 at the Jewell-Rittman Family Funeral Home with Rev. Dave Blystone officiating. Public calling will be from 4 pm – 8 pm Monday at the funeral home where Masonic Memorial Rites will be performed at 7 p.m. by the New Washington Masonic Lodge. Burial will be at Garland Brook Cemetery. Survivors include his daughters, Katrina (Russell) Franklin and Kelly (Anthony) Goodin both of Austin, IN, Klarinda (Todd) Tutterow of Scottsburg, IN; sons, Fred Caudill Jr. of Corydon, IN, and Jeffrey Caudill of Scottsburg, IN; step-daughters, Julie Knox, Pam Knox and Sara (William) Estell; several grandchildren and great grandchildren; a brother, Jim (Patsy) Caudill of Jeffersonville, IN and a sister, Sherry Snead of Jeffersonville, IN and several nieces and nephews. Fred was preceded in death by his parents, William Riley Caudill and Thelma Hager Caudill; spouse, Carol Ann Caudill on October 30, 2016; twin daughters, Kathy and Kenya Caudill; brothers, Don and Jack Caudill; sisters, Jean Dixon and Gerry Hogan. Due to the new mandate limiting gatherings to 50 people, visitors are required to wear face masks and maintain social distancing. We encourage you to share your support with the family, being cognizant that others wish to do the same. You may be asked to wait outside the building as we comply with this mandate.

The family of Fred R. Caudill Sr. created this Life Tributes page to make it easy to share your memories.

Send flowers to the Caudill family.