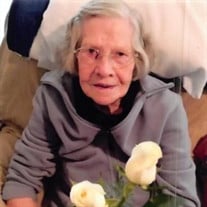 Fern Iolus (Artis) Romine began her earthly life on August, 14, 1920 as a premature baby and her eternal life on May 24, 2021 as a centenarian. With the help of her family, her wish to die at home was able to be granted. One of the most important things in her life was her family which was not limited by DNA. She was preceded in death by her first husband, Lance Artis, and her second husband, John Romine, her daughter, Linda Artis, daughter-in-law Jeanne Artis, her grandson, Darryl Wayne Artis, her great-grandson, Dustin Carmer and countless other family and friends. Her survivors include but are not limited to her children Lloyd (Judy), Richard (Joyce), Randy and Amy Artis; her step-children, Janet Tempest, Sharon (Jim) West and Terry (Judy) Romine. She is survived by several other generations starting with twelve grandchildren; twenty-two great grandchildren and twenty-two great great grandchildren. Another important thing in her life was her faith. She was active in the Elizabethtown and Sandy Hook United Methodist Churches as well as the Burnsville Christian Church. She and Lance were youth groups leaders at the Elizabethtown church for years and her influence is still evident in the lives of many who participated. She was always willing to work in the kitchen, nursery or teach a children’s class. She would say that you should never stop growing in your faith, growing her own faith through reading the Bible and devotionals, participating in various Bible studies and spending much time in prayer. It is impossible to describe what she experienced in over 100 years of life. She and her first husband, Lance Artis were pillars of the community of Sandcreek Township and especially Elizabethtown. They were both active in the Fire Department. At one time they owned and operated the grocery store which served as a gathering place for many. She and Lance enjoyed camping with family and friends. She and John would take trips together. No one ever left her table hungry and she could stretch a meal intended for her family to feed twice as many people. Many will miss her yeast rolls, red velvet cakes, deviled eggs lemon meringue, raisin and butterscotch pies to name just a few of the items that were often found on the family dinner table. Because she was always willing to share her recipes, the tradition of her family eating well will continue on for generations. She would participate in a friendly competition with the other women in the neighborhood to see who could put up the most produce from the garden. She loved to read and around the age of 95 learned to use a Kindle because Amy refused to keep buying her books. She taught herself to play the piano just by listening while Amy took lessons. She was always an active participant in her children’s lives; playing ball with them, helping with school and 4H projects or attending school or church events. She was quick to encourage you and sometimes give you needed advice. There is more that could be said but the most important thing she would want you to remember is that she always loved you and always will. Visitation will be at Jewell-Rittman Funeral home on Sunday, May 30, 2021 from 1:00 until the service at 3:00 p.m. In lieu of flowers, the family requests that memorials be made to Our Hospice of South Central Indiana.

Fern Iolus (Artis) Romine began her earthly life on August, 14, 1920 as a premature baby and her eternal life on May 24, 2021 as a centenarian. With the help of her family, her wish to die at home was able to be granted. One of the most... View Obituary & Service Information

The family of Fern I. Romine created this Life Tributes page to make it easy to share your memories.

Send flowers to the Romine family.