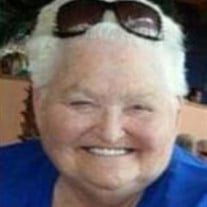 Fern Murray, 81, of Columbus, died at 11:09 A.M. May 12, 2020, at Willow Crossing. Fern was born September 25, 1938 in Adair County, Kentucky, the daughter of Cassius and Balla (Polston) Sullivan. She married Virl L. Murray, July 10, 1960. Fern worked with children all her life in one form or another. She and her husband served as pastor and pastor’s wife in Columbus for 57 years. She was a foster mother for over two decades. From Kay- Mom’s family was very important to her but she always made time for others. From Vance- She was the ultimate example of unconditional love. See you in the morning! From Dwayne- Family meant everything to her. God first above all, then comes family, nothing meant more, and nothing is worth fighting for more than family. From Wayne- She was a woman who was fiercely passionate about her family and her relationship with God. The funeral and calling hours will be private at Columbus First Assembly of God with Pastor Wayne Murray officiating. Burial will be private at Garland Brook Cemetery. In lieu of flowers memorials may be made to Kingdom Builders through the Grace Assembly of God, located at 6822 N US Hwy 31, Greenwood, Indiana, 46184. She is survived by sons, Vance (Rhonda) Murray and Dwayne Murray both of Columbus, Wayne (Traci) Murray of Greenwood; daughter, Kay Gibson of Columbus; grandchildren, Bridget Gibson, Eric Gibson, Dustyn Murray, Adam Murray, Chelsea Murray, Courtney Day, Taylor Moon, Brittani Zehr, Braden Murray, and Elliott Murray; and 24 great-grandchildren. She was preceded in death by husband; son, Samuel Lee Murray; granddaughter, Brooklyn Nicole Murray. Arrangements provided by Jewell-Rittman Family Funeral Home. You are invited to view her video tribute, light a virtual candle and send a message to the family via the funeral home website. www.jewellrittman.com

The family of Fern Murray created this Life Tributes page to make it easy to share your memories.

Send flowers to the Murray family.