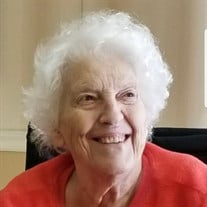 On Sunday the 28th of March 2021 at 10:17am, Esther Ranck passed with peace and grace. She was surrounded by family in the home she and her husband had built. This was her final request and through great love and care by her children she passed at home exactly as she had wished. Esther was born Esther Marie Allisbaugh on August 25th 1934 to Pearl and Raymond Allisbaugh. She was raised in Wabash Indiana. Upon her graduation from high school, she was accepted to IU and recieved a degree in elementary education. While attending IU she joined the DZ sorority, where she formed many lifelong friends. It was also while at IU that she met the love of her life Benjamin Ranck. Ben and Esther were married in the summer of 1956. Soon after they moved to Columbus, and began their life and family. Their family grew quickly with the additions of their children Melissa, Christopher, Allyson and Andrew. Esther was a devoted mother and wife. Her husband and children always took a front seat in her world. She was instrumental in the formation of Sandcrest Medical Corp., as were all the wives of Drs. Ranck, Rau and Daughtery. She gave tirelessly to charities throughout Indiana and beyond. It was all about calenders, schedules, sporting activities, social engagements and of course the occasional "post-it" note at the Ranck Residence. As her family grew and blossomed, so did Esther. Once all the kids had moved out, Esther was able to give her decorating business, Mad Hatter Designs, more attention. Esther, alongside her close friend Connie Wilson, decorated many of the homes and major life events for the people of Columbus. This was just one of many ways she was able to enhance the lives of all those she came into contact with. Travel was something Esther always loved. Esther and Ben would jet off on trips to see the births of their grandchildren, as well as various national and international travels. She had spent many summers and stolen weekends with her children and grandchildren throughout her life. Whether it was a trip to Rome, hiking in the Grand Canyon, a week with her grandchildren or their beloved vacations to Fort Meyers with Ella and David Elwood every fall, Esther was always ready for a vacation or quick trip! Esther is survived by her children Melissa Smith-Siggers (Chip), Allyson Black (Matt) and Andrew Ranck, her grandchildren Hunter, Casey (Julie), Benjamin (Jessica), Samantha (Eric), Christopher (Ariel), Andrew, Shiloh (Samantha) and Jude, Dustin (Misty) and Matt. She thrilled in each addition of her 8 great grandchildren. She is preceeded in death by her beloved husband Benjamin, son Christopher and granddaughter Molly. She will be deeply missed all her children, grandchildren, extended family and friends. Esther led by unequivocal example what it was to be an amazing mother, incredibly strong woman and immeasurably precious friend. She was a beacon of light, hope and strength for us all. A celebration of life will be scheduled at a later date In lieu of flowers, memorial contributions may be made to Our Hospice of South-Central Indiana. Arrangements were entrusted to Jewell-Rittman Family Funeral Home.

On Sunday the 28th of March 2021 at 10:17am, Esther Ranck passed with peace and grace. She was surrounded by family in the home she and her husband had built. This was her final request and through great love and care by her children she... View Obituary & Service Information

The family of Esther M. Ranck created this Life Tributes page to make it easy to share your memories.

Send flowers to the Ranck family.