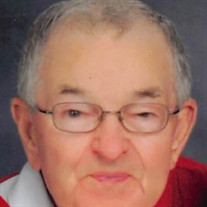 Ernest A. Piper, 87, of Elizabethtown, passed away at 3:40 a.m. Monday, November 1, 2021 at Silver Oaks Health Campus. He was born in Glasgow, KY on January 19, 1934 to Clem Piper and Mary (Eudy) Piper. He married Anne Mae Huddleston on April 21, 1952. Ernest and Anne Mae lived 40 plus years in Azalia, Sandcreek Township. Ernest was an avid farmer, working on many farms in Bartholomew County. He was a member of Columbus Baptist Church and retired from Hamilton Cosco after 42 years of service. He was a volunteer worker helping to build many churches. In his spare time, he loved building trac racks for churches, where they were distributed all over the country. Funeral services will be at 10 a.m. Friday, November 5, 2021 at Jewell-Rittman Family Funeral Home with Rev. Charles Kennedy officiating. Calling will be from 4 p.m. – 8 p.m. Thursday at the funeral home. Ernest will be laid to rest next to his wife at Garland Brook Cemetery. Memorial contributions may be made to Alzheimer’s Association or Our Hospice of South-Central Indiana. Survivors include his son, Dale (Mel) Piper of Azalia, IN; a daughter, Linda Sue Naylor of Columbus, IN; brothers, Roy Piper of Louisville, KY and Bryant Piper of Louisville, KY; grandchildren, Angela Renee Naylor-Cannon, Gregory Shawn (Kelly) Naylor and Danny Dale Piper Jr.; great-grandchildren, Keegan (Lindsay) Reeves, Rylan Cannon, Jayce Cannon, Logyn Naylor, Brooke Naylor, Maddie Naylor, Quinn Piper and Alex Piper; a great great grandson, Jackson Leslie. Ernest was preceded in death by his parents; his wife, Anne Mae Piper on February 13, 2014; a daughter, Diana Faye Piper; granddaughter, Heather Ann Piper; step-mother, Liz Piper and 6 brothers and 3 sisters. You are invited to view his video tribute, light a virtual candle and send a message of condolence to the Piper family via the funeral home website: www.jewellrittman.com

Ernest A. Piper, 87, of Elizabethtown, passed away at 3:40 a.m. Monday, November 1, 2021 at Silver Oaks Health Campus. He was born in Glasgow, KY on January 19, 1934 to Clem Piper and Mary (Eudy) Piper. He married Anne Mae Huddleston on April... View Obituary & Service Information

The family of Ernest A. Piper created this Life Tributes page to make it easy to share your memories.

Send flowers to the Piper family.